This article deals with the person and office of the sheriff in different countries; for other meanings, see Sheriff (disambiguation) .

The sheriff (female sheriffess and out of date sheriffess ) with police duties is now part of the legal system in Australia , Canada and the United States . In England and Wales , a sheriff is a mostly honorary representative of a Shire with mainly ceremonial and representative functions. In India, too, sheriffs have an office without police authority. In Ireland Sheriffs are administrative officials and in Scotland they perform a judicial function.

The term is derived from the Old English word sċīrġerēfa . Sċīr ( shire ) denotes an administrative unit, comparable to a county . In Anglo-Saxon England the sċīrġerēfa or shire-reeve was a high administrative officer, comparable to a Vogt , whereby reeve or Old English gerēfa is related to German greve . Under the Norman kings, especially under Henry I, the sheriff's offices were mostly filled with men of relatively simple origin. They formed the basis for the English landed nobility, the gentry .

The sheriff's office in different countries

The office of sheriff was introduced in the then British colony of New South Wales in 1824 with the Charter of Justice . According to the charter, the sheriffs were appointed by the governor on the first Monday in January for a term of one year. Among other things, they were responsible for the enforcement of orders from the highest court up to the death penalty, prison supervision and the transport of prisoners. After the separation of Tasmania , South Australia , Victoria and Queensland , separate sheriffs were appointed for the newly created administrative units. The same is true of the former colonies of South and Western Australia . These colonies became independent states through the constitution of Australia in 1901 , so that the office of sheriff now exists in every state. In the meantime, some of the sheriff's earlier duties have become the responsibility of other agencies. For example, prison supervision was entrusted to the Department of Corrective Services . The death penalty has been abolished entirely in Australia. With the entry into force of the constitution, further tasks were transferred to the newly created office of marshal. Today, the sheriffs' duties include the delivery of court summons and enforcement notices as well as the execution of arrest warrants and orders from the Supreme Court as well as the local, district and family courts. They also act as bailiffs and keep a number of courts safe.

Among the Indian cities, Bombay , Chennai and Calcutta have sheriffs. It is an apolitical office without police powers, which is mostly assigned to prominent citizens of the respective city for a limited time. The tasks of the Indian sheriffs are primarily of a representative nature.

In Cork and Dublin , sheriffs are tasked with enforcing civil court orders, such as collecting court-imposed fines. Outside of these two cities, these tasks are performed by the so-called county registrars . The sheriffs are also responsible for monitoring elections. In Ireland there are also the so-called Tax Sheriffs , officials of the Irish tax and customs office.

The sheriff's responsibility in Canada includes personal protection, prisoner transport and the protection of public buildings. In the province of Alberta there is also traffic monitoring. A separate unit, the Security and Information Management Unit (SIM), deals with counter-terrorism. 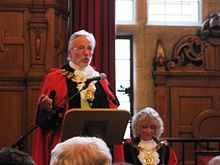 The honorary office of the high sheriff (female high sheriffess ) is of a more representative nature in England and Wales and includes, among other things:

In practice, some of the above-mentioned tasks have now become the responsibility of the police or other authorities, for example personal protection for judges or the maintenance of law and order. Nevertheless, people who are familiar with the work of the police or the judiciary, such as police officers, public prosecutors or judges, are still selected for this office. The appointment is made by the Crown. The exception is Cornwall , where the high sheriff is appointed by the duke . An appointment as high sheriff remains in place even in the event of the death of the king or queen.

Until the British judicial process reform in 2004, the bailiffs of the High Court were referred to as Sheriff's Officers, or Sheriffs for short, then the title High Court Enforcement Officer (HCEO) was introduced.

There are two high sheriffs in the City of London , each elected by the Livery Company . As in the rest of England, their tasks are more ceremonial and representative. Their jurisdiction extends only to the city. The High Sheriff of Greater London is responsible for the rest of the city.

In Scotland sheriffs are now judges at what is known as the Sheriff Court . They are each responsible for a judicial district called sheriff cathedral . In 1975 Scotland was divided into a total of six such judicial districts. The sheriffs deal with a wide variety of cases, particularly those relating to civil and criminal law. They are appointed by the Queen on the recommendation of the Prime Minister , who in turn receives recommendations from the First Minister of Scotland .

In the United States, a sheriff is typically a four-year elected sheriff's office director . Since the responsibility of the police authority ends at the respective city limits, the sheriffs only perform police duties within the counties . The first mention of a sheriff as a county official in what is now the United States comes from 1662.