The abbey church as seen from the cloister 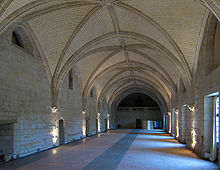 The Abbaye royale Notre-Dame de Fontevraud (old spelling Fontevrault ; Latin Abbatia Fontis-Ebraldi ), a royal abbey, was a mixed monastery that was founded around the year 1100 by Robert von Arbrissel with the help of the Hersendis of Champagne . It is located in the municipality of Fontevraud-l'Abbaye in Anjou in France , near the cities of Saumur and Chinon and is the burial place of the Plantagenets . It has been classified as a monument ( Monument historique ) since 1840 .

The Abbey of Fontevraud, also known as the “monastery town”, is considered to be the largest monastic building in Europe. The extraordinary architectural work was built on an area of ​​14 hectares.

The conception as a mixed monastery initially consisted of giving priority to women. Later two separate monasteries existed side by side, then finally four:

While the women were to devote themselves exclusively to prayer within a strict enclosure, the necessary work was the responsibility of the men; clerics and lay people lived together with them without separation. Robert von Arbrissel, who refused the title of abbot, was initially the master of the entire community. He always went barefoot and wore clothes made of coarse cloth. The community of Fontevraud received an enormous influx from all social classes; Above all, however, rejected wives, prostitutes and even lepers sought refuge with Robert von Arbrissel. From 1115 on and for seven centuries, according to the will of the founder, 36 abbesses were to succeed one another at the head of the order.

From the beginning, the monastery had a strong connection to the House of Plantagenet , the Counts of Anjou : They particularly promoted this monastery and made it their royal burial place. Eleanor of Aquitaine retired to this monastery in old age and is also buried there. The monastery also houses the graves of her second husband Henry II of England , their son Richard the Lionheart and the wife of his youngest son Johann Ohneland , Isabella of Angoulême .

The former monastery buildings have largely been preserved, even if they have been rebuilt in different styles over the centuries. The Romanesque kitchen building and the Renaissance- style cloister from 1522 with the chapter house and the refectory should be emphasized .

Choir of the abbey church

The abbey church consists of a choir, nave, transept with crossing tower and a west facade with two smaller, non-accessible towers. In the course of the restoration of the outer walls, the Romanesque stone carvings, mainly consisting of capitals and friezes, were replaced by new works in the Romanesque style in particularly badly weathered areas, but without completely replacing the old substance.

The current condition of the interior is also the result of a thorough restoration. The church building was already damaged during the French Revolution. Under Napoleon the monastery was turned into a prison and, curiously, remained so until 1963. From 1821 four ceilings were drawn into the church and workshops and dormitories were set up; This work led to the destruction of the domes and the enlargement of the glass windows in the north, which was reversed in the course of the restoration. The choir was built in Romanesque style between 1106 and 1117 under the direction of the prioress Hersendis of Champagne , and it was consecrated in 1119 by Pope Calixt II . In the choir is the empty sarcophagus of the monastery founder Robert von Arbrissel. The choir shows the traditional simplicity of the Romanesque churches of the Loire region and is an expression of the ascetic spirit of Robert von Arbrissel. With its colonnade, the choir has clear parallels to the Notre Dame la Grande church in Poitiers .

In the course of building the church, the original plan was changed. The nave was designed as an undivided hall from 1125 instead of the usual three-aisle, which is vaulted with a series of four domes. Like several similar churches in southwest France, this construction is of Byzantine origin. Due to this construction, the church is clearly divided into a nave and choir. The nave was completed in 1160.

In the nave, double services or double half-columns are placed on each wall pillar as a relief on three sides . These peculiar pillars are both a support and a wall. The capitals are influenced by the art of southwestern France (Saintes, Angoulême), both in their choice of themes and in their style.

Tomb of Eleanor of Aquitaine and Henry II of England

Tomb of Isabel von Angoulême and Richard the Lionheart

In the center of the nave in front of the entrance to the choir, Henry II of England and Eleanor of Aquitaine are buried in the upper row, including Richard the Lionheart and Isabella of Angoulême , the wife of Johann Ohneland , whose tomb was the only one carved from wood. The other three are tufa sculptures that were carved around the time they died, that is, at the beginning of the 13th century (between 1200 and 1256). They are among the earliest grave sculptures in which the deceased are depicted as reclining, as gisants .

This burial place of the English royal family of Plantagenet is one of the most important in European history and is in line with that of the Salian emperors in Speyer , the Hohenstaufen kings in the Capella Palatina in Palermo , the French kings in St. Denis and the other English kings in Westminster Abbey .

The grave figures are all shown in an idealized form. For example, Eleanor of Aquitaine is not depicted as an 82-year-old old woman at the end of her life, but in the prime of her years. In contrast to the white coolness of the church, the grave statues are still kept in the original, intense colors. Church interiors used to have this color scheme. The statues are larger than life and their authors are unknown. Clear attempts have been made to preserve the majestic character of the figures in their grave statues. They are crowned and lie on a display bed , as it corresponds to the royal funeral rites.

Richard the Lionheart and Isabella of Angoulême: The two kings of this group of four are dressed in a tunic and hold a scepter in their gloved hands, the symbol of royal power; at her side lies a knight's sword.

Eleanor of Aquitaine was also portrayed as a reader on her death bed. This underlines her legendary scholarship, one of the most important women of the Middle Ages.

Chimney outlets in the dome of the kitchen; the lowest capital has the shape of a crown

As a rare exception, the Romanesque-style kitchen building in Fontevraud has been preserved. The floor plan of the building is an octagon - as in the baptisteries - and the vault of the kitchen has also become eight-sided thanks to a clever interlocking of geometric figures. A stone kitchen was not only built for fire protection reasons, but also for reasons of representation. The kitchen, located just behind the refectory, underscored the status of the entire monastery as a royal abbey with its capitals in the form of crowns.

The nesting of the building creates niches in the walls that were used as fireplaces. A look directly into the unusual and high vault shows a rather complicated construction for a kitchen. Even in this apparently purely functional building, attention was paid not only to clean workmanship, but also to the number symbolism. In the high vaults there are hoods for the smoke from the fireplace and for the vapors from the prepared food. The roof is built in stone in the Angevin Romanesque style and shaped like a pine cone.