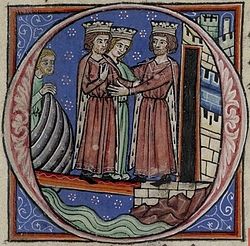 Richard the Lionheart and Johanna meet King Philip II of France. (Miniature from the 13th century)

Johanna von England , also Johanna Plantagenet ( English : Joan of England , French : Jeanne d'Angleterre ; * October 1165 in Angers , † September 4, 1199 in Fontevraud-l'Abbaye ), was an English princess from the House of Plantagenet and by their marriages Queen of Sicily and Countess of Toulouse.

She was a daughter of the English King Heinrich II Plantagenet and the Duchess Eleanor of Aquitaine . Her full and half siblings included the English kings Richard I Lionheart and Johann Ohneland as well as the French princess Maria of Champagne .

Johanna was born in Angers Castle in Anjou , the home of her family, and spent her childhood at her mother's farms in Winchester and Poitiers . In 1176, the Sicilian King Wilhelm II sent a request to her father through an embassy to marry one of his daughters. The engagement was announced on May 20th of that year and on August 27th Johanna left her home , escorted by the Bishop of Norwich and her uncle Hamelin de Warenne . In Saint-Gilles in the south of France , she was received by a delegation from her fiancé and taken to the Kingdom of Sicily . On February 13th 1177 the marriage and coronation of eleven-year-old Johanna took place in the cathedral of Monreale near Palermo .

The marriage remained childless until her husband's death in 1189, which is why the question of succession in Sicily raised several problems. With the support of the Norman barons, Count Tankred of Lecce , who was an illegitimate grandson of King Rogers II, ascended the throne . However, the Roman-German Emperor Heinrich VI. in the name of his wife Constanze of Sicily , who was a daughter of King Rogers II, claim to the throne. This led Sicily into a protracted armed conflict with the emperor. King Tankred treated Johanna like a prisoner and locked her up in the palace of Palermo .

Johanna (right) and her mother Eleanor of Aquitaine (left) depicted in a medieval wall painting in the Sainte-Radegonde chapel in Chinon.

In September 1190 King Philip II of France and Richard the Lionheart reached the Kingdom of Sicily on their way to Palestine. Richard immediately came into conflict with King Tankred about the treatment of his sister and forced him to release Johanna. But when Tankred refused to pay their Wittum, Richard and his crusaders stormed the port city of Messina on October 4th, which forced Tankred to give in. During the wintering of the crusader army in southern Italy, Richard came to a peaceful understanding with Tankred and even to a common alliance against the emperor. Johanna saw her mother again when she arrived in Messina on March 30, 1191 with Richard's fiancée, Berengaria of Navarre , who had been escorted by her to southern Italy .

Johanna decided to take part in her brother's crusade and traveled with Berengaria on a ship across the Mediterranean. However, they were pushed away from the main fleet in a storm and were the first to reach the Cypriot port city of Limassol in April 1191 . The Byzantine ruler of Cyprus , the self-proclaimed Emperor Isaak Komnenos , intended to capture the two women, but Richard the Lionheart reached the island in time and conquered Limassol, where Richard and Berengaria were married on May 12, 1191. Shortly afterwards the English king was able to conquer all of Cyprus; Isaac Komnenus had to surrender. After the conquest of Acre , Johanna and her sister-in-law moved to this city, where they stayed during the further course of the crusade. According to a later written report by the Bar Hebræus , Saladin asked Richard in October 1191 for a marriage between Joanna and his brother al-Adil Abu Bakr (called by the Christians "Saphadin") for the purpose of a mutual peace , the couple should rule to be awarded over Jerusalem . However, this project ultimately failed because of al-Adil's refusal to commit the required conversion to the Christian faith. At the turn of the year 1191/92 Johanna and Berengaria traveled back to France.

Johanna was married to Count Raimund VI by her brother Richard in 1196 . betrothed by Toulouse , the marriage was concluded in October that year in Rouen . Above all, it was supposed to serve the peace between Richard and the Count, who had fought him before. The provinces of Agenois and Quercy were given to Johanna as dowry ; in July 1197 she gave birth to her only surviving child, the future Count Raimund VII of Toulouse .

Johanna's marriage was anything but harmonious, at the court of Toulouse she was met with rejection due to the generational rivalry between the nobility of Toulouse and their Aquitaine-Angevin ancestors. When she was pregnant again in 1199, she was abandoned by her husband in the face of a revolt by several lords of the castle. While she was leading a siege of the castle of Les Cassès , she was betrayed by her supporters and then fled to Aquitaine to seek help from her brother. Richard the Lionheart, however, found himself fighting rebellious vassals at this point and was wounded during the siege of Châlus . Together they moved to live with their mother in Chinon , where Richard died as a result of his wounding.

Johanna then asked for admission to Fontevrault Abbey , which was rather unusual for a married and pregnant woman, but was nevertheless allowed. There she died a little later as a nun in childbed. She gave birth to a child who lived long enough to be baptized, but died just days later and was buried in Rouen Cathedral. Johanna herself, like her brother shortly before, was buried in Fontevrault.