from Wikipedia, the free encyclopedia
Battle of Towton
Part of: Wars of the Roses 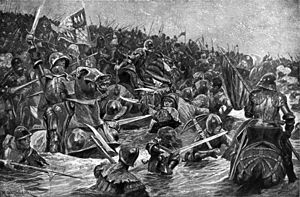 The Battle of Towton was a battle of the Wars of the Roses that was fought in England . It took place on March 29, 1461 ( Palm Sunday ) on a hill plateau between Towton and Saxton , Yorkshire .

The parties involved were the Yorkists, led by Edward, Earl of March, who later became King Edward IV , and the Lancastrians, led by Henry Beaufort . A total of between 50,000 and 110,000 men took part in this battle, but the statements of the chroniclers vary greatly. Modern historians put the total number of casualties on both sides between 20,000 and 30,000 people, many of whom were not killed until after the end of the battle, when the Lancastrian army was on the run. One of the reasons for the high number of those killed is likely to be the previous agreement between both parties not to take prisoners (no quarter would be given nor asked) . The battle ended in a resounding victory for the House of York and was one of the decisive battles in the Wars of the Roses.

By 1461 the Wars of the Roses had been going on for six years, and the nobles of the empire (the peerage , made up of the lords and nobility of England) had sided with one side or the other.

At the Battle of Towton, 20, according to other sources 28 Lords (which corresponds to about half of the English nobility at the time) took part, who are also considered the largest landowners of the time. Most of them were on the side of the Lancastrians. The economic background of the Wars of the Roses forced everyone to choose his side in order to keep his property and class. One wrong choice could mean death, or at least ruin.

The Battle of Towton is considered to be one of the few, if not the only battles in England where the fighting was so violent that the battle had to be paused to remove the bodies of the fallen so that the lines of the fighting were reunited arrived. Since little cavalry and no artillery were used in this battle , the man-to-man combat developed into the determining element of the very bloody battle. After the Battle of Towton, the bodies of up to 28,000 people believed to have fallen were scattered across snow-covered fields in the battlefield.

Background to the battle

After the Battle of Wakefield and the Second Battle of St Albans , the Lancastrians and Yorkists were level in numbers and strength. The supporters of the House of Lancaster also controlled the cities of York and Salisbury . Richard Neville , the Earl of Warwick, then the richest man in England and known as the "kingmaker", had sided with the Yorkists and confirmed Edward's claim to the throne. He also controlled the city of London .

On March 6, 1461, Edward had read a proclamation south of the Trent , a river in central England, in which he announced that no one would be allowed to cross the River Trent without his permission and that he would in future be Edward IV King of England be.

King Henry VI. who was considered mentally confused had placed all matters of war in the hands of his Queen Margaret of Anjou . This gathered the vassals of the House of Lancaster around their stronghold, the city of York.

Edward himself wanted to bring about a decisive battle and marched north to face the army of the Lancastrians. On March 29th, Palm Sunday in 1461, this decisive battle finally took place despite constant snowstorms.

Course of the Battle of Towton 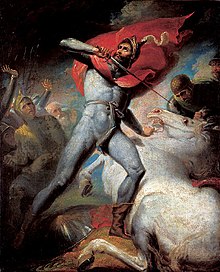 On the eve of the Battle of Towton, on Saturday, March 28th, there was already a first meeting between the parties, known as the Battle of Ferrybridge (some historians relate this battle to the Battle of Towton because of the short time lag a). The next morning the two armies met directly. A contemporary anecdote tells that the Earl of Warwick brought the news of the high casualties to Edward after the Battle of Ferrybridge and killed his horse in order to fight as a common man with his troops and to show that he had no intention have to flee from the battlefield.

In the field near Towton, a flat plateau about a kilometer long, the 60,000 Lancastrian fighters had lined up closely, protected by a sloping steep slope to the right. At the bottom of this slope was the "Coch Beck", a small stream that had swelled into a river due to the weather (rain and heavy snowfall).

The soldiers of the House of York took up positions on the opposite side of the mountain, slightly below the plateau on which the Lancaster Army stood. Around 11 a.m. on Palm Sunday the wind changed and the Yorkist long archers began to fire at the opposing positions. Contemporary sources speak of up to 120,000 arrows per minute being fired. Due to the headwind and the blizzard, the Lancastrians' arrows did not fly far enough and were therefore largely ineffective. This forced the Lancastrian army to attack to avoid the further fire and its effects.

York's outnumbered army was initially under severe pressure. But in the middle of the afternoon the Duke of Norfolk appeared with his contingent of fresh troops and attacked the unprotected left flank of the Lancaster Army. The battle was as good as won, but Lancaster's army had not yet given up ground as previous negotiations on the terms of defeat and possible prisoners made this impossible. As darkness fell, the Lancastrian army was rolled up over the left flank until a mass escape began at around 10 p.m.

During this escape, the steep slope turned out to be a disadvantage, because the fleeing fighters had to climb down it hastily, stumbled on the smooth, snow-covered ground and, according to chroniclers, drowned in the flood of the stream or were trampled to death by those who followed. The survivors attempted to reach the city of York (the center of the Lancastrians) the following night . However, York was stormed by Edward IV's men around midnight. The hunt for dispersed members of the army lasted two days. It is believed that up to 40 percent of the Lancastrian army was killed in this battle. This would mean a number of up to 20,000 soldiers.

Research on skeletons found during excavations in the fields in and around Towton in 1996 shows that large numbers of those killed died of head wounds caused by swords , battle axes and war hammers . This suggests that the chroniclers ' accounts of the Lancastrian army in desperate flight tossing away weapons and helmets are true.

Effects of the battle

The Battle of Towton was not the last of the Wars of the Roses, but it was arguably one of the most decisive. Just two hours after the end of the battle, King Henry , Queen Margaret and Henry Beaufort, 2nd Duke of Somerset, had to flee to Scotland. The nobles who had sided with the House of Lancaster swore allegiance to King Edward.

Reports of the battle

There are no direct chroniclers or eyewitness accounts of the Battle of Towton. All available data are therefore based on the chronicle of Edward Hall , whose grandfather claimed to have participated in this battle, a few fragments from the pen of other chroniclers who also reported about it clearly after the battle, and on excavations of the battlefield. Although Hall wrote about 80 years after the battle, it appears that he had access to original materials, such as lists of combatants. He therefore also gives the number of those killed very precisely at 36,776, an extremely dubious figure, since no exact lists of all those who fell, but especially those of the defeated side were kept. In general, it is very difficult to determine the exact course of events in the time of the Wars of the Roses, since the historiography of the victorious party, i.e. the Yorkists, expressed its position very intensively in the historical works and reports that did not correspond to this, also in later ones Times were banned.

The recent excavations and the discoveries made in the process cast doubt on the information on the number of participants in the battles and the number of dead. According to Hall, the bodies of those killed were simply buried on the spot, but the excavation situation does not cover this statement. No skeleton finds were made at the historical sites during test excavations.

It is very difficult to decide whether the lists of participants in chronicles are a credible source of the number of fighters, as the immediate battlefield findings do not support this in some cases. It is also known that such pattern rolls , on which the payment of the respective commanders was based, very often contained non-existent soldiers.

Michael M. Miller assumes in his book that with an estimated total population of 3 million in England a number of 100,000 participants (as sometimes assumed) does not appear credible; he compared different sources and calculated a total of 30,000–35,000 fighters. Charles Ross assumes in his standard biography of Edward IV that both sides had quite considerable troops, especially since several high nobles were present on the Lancaster side; he assumes around 50,000 men. The lack of archaeological evidence does not allow a decision about which of the statements (both by contemporary chroniclers and modern historians) are really correct.