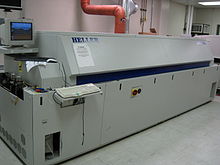 Possible soldering errors that can occur during reflow soldering are the wicking effect , the blurring and the tombstone effect .

The carrier substrate equipped with components is placed on a heating plate and heated. After the solder has melted evenly, the carrier substrate is removed from the plate. This method can be used with inorganic carrier substrates. Here, the entire carrier substrate is brought to soldering temperature. Organic carriers are normally not suitable for the contact soldering process on the heating plate due to their glass transition temperature (e.g. glass transition temperature for standard circuit boards approx. 140 ° C). With the contact soldering method, one-sided assembly is possible. There are systems in which the equipped carrier substrate has void-free and therefore extremely reliable soldered connections thanks to a vacuum process that is used at the same time . The main areas of application for vacuum contact soldering are the soldering of power semiconductor chips (soldering without gaseous inclusions), hermetic sealing by means of soldering and flux-free contacting. By using a vacuum chamber, inert process gases such as nitrogen , reducing process gases such as forming gas , up to 100% hydrogen or wet-activating formic acid can be used in a controlled manner in the soldering process. In order to solder completely residue-free, plasma activation can be used during the soldering process in a vacuum . This front-end suitability also allows MOEMS , MEMS and reflow soldering at wafer level. Plasma-assisted soldering also offers advantages for soldering power semiconductor chips, as the cleaning process that is normally required after soldering before wire bonding is not required.

A stamp or bracket adapted to the shape of the housing of the component to be soldered is heated with a resistance heater. This then presses the component connections onto the solder joint and melts the solder. The heating is then switched off and the stamp is only lifted off again after it has solidified. The soldering points of resilient component connections can thus be safely soldered. As a rule, only individual components are soldered one after the other.

The boards to be soldered are soldered in continuous soldering sections. The item to be soldered is transported through an oven by a conveyor system. The soldering process can be controlled by the time spent in the various temperature zones. Usually there are four zones, one to warm up the entire circuit, the second to activate the flux , the third to solder and the fourth to cool down. Reflow soldering with an infrared heater is a simple process for producing circuit boards in series. The disadvantage of infrared radiators is the strong absorption of the radiation energy by black components (IC housing), which results in uneven heat distribution and can lead to local overheating.

The fully convection reflow soldering systems are similar to the infrared heater systems, but here air is heated and fed to the item to be soldered via a nozzle system. This achieves a more even distribution of heat than is possible with infrared heaters. Another advantage is the furnace's greater heat capacity. This process is most commonly used in electronics manufacturing. The disadvantage is that cold zones can arise in the shade of large components, as these are not always 100% enclosed when air is convected. Every board that has to be soldered passes through at least 4 chambers. Preheating, flux activation, peak zone and cooling.

Vapor phase soldering, also known as condensation soldering, uses the heat of condensation released during the phase change of a heat transfer medium from the gaseous to the liquid state to heat the assembly . Condensation takes place on the surface of the item to be soldered until the entire assembly has reached the temperature of the steam. If the liquid boils, a saturated, chemically inert vapor zone forms above it, the temperature of which is largely identical to the boiling point of the liquid, so that an optimal protective gas atmosphere is created and oxidations are excluded.

Perfluoropolyether (PFPE, commercially available for example under the brand name Galden ) is used as the heat transfer medium . These liquid polymers are made up of carbon, fluorine and oxygen. The C - = - and CF bonds in the molecule are extremely stable. Perfluoropolyethers are among the most stable bonds in carbon chemistry. The fluorine atoms on the outside shield the carbon chain. In this way they protect the more sensitive CC bonds from chemical and thermal effects. They have excellent heat transfer coefficients and good dielectric properties. In contrast to CFC- containing gases, PFPEs have no ozone depletion potential.

The heat transfer is fast and largely independent of the geometry of the item to be soldered. There are no cold zones in the shade of large components. Due to the well-defined soldering temperature and the uniform heating, no overheating of the components is possible. This enables soldering with low activated fluxes . The requirement for preheating zones is lower, which means that vapor phase soldering systems are usually more compact than infrared ovens. The main application is series production.

The soldering points are heated with a laser beam , which can transfer a lot of energy with pinpoint accuracy. The soldering point is heated to a very limited extent in terms of time (soldering time approx. 0.2–0.4 s) and spatially. As a result, there is almost no thermal stress on the components. A -alloying of the conductor paths can be avoided. Because of the high costs, this method is only profitable in mass production for highly sensitive components.