A gyroplane , also known as an autogyro , a gyrocopter or a gyrocopter , is a rotary-wing aircraft that works like a helicopter . However, here the rotor is not driven by an engine , but rather set into rotation passively by the wind ( autorotation ) when the rotor axis is tilted backwards , whereby the necessary lift is created by the wing profile of the rotor blades even at slow forward flight . Propulsion takes place as with a fixed wing aircraft, usually by a propeller engine.

Gyroplanes are interesting for applications where low speeds are desired, but vertical take-off and landing are not necessary. The advantages are the stall safety (i.e. a stall is not possible), relatively low construction, maintenance and operating material costs , the low weight and the small footprint as well as the easy learning of the operation.

The inventor of the gyroplane is the Spaniard Juan de la Cierva , who made his Autogiro known as a protected brand name in 1923. 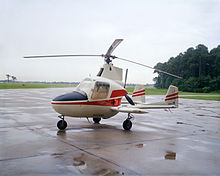 The autorotation comes about because the rotor blade has such a high angle of attack in the inner area of ​​the rotor plane that a force accelerating the blade results. In the outer diameter, however, the resultant brakes the leaf. These forces are in equilibrium in stationary flight. If the angle of attack of the rotor plane is increased, the boundary between the accelerating and decelerating areas shifts outwards. An imbalance arises in favor of acceleration, ergo: the rotor increases its speed. This makes it understandable how the gyroplane automatically maintains the required rotor speed to carry the machine.

The rotor is attached to a mast. A flapping hinge that allows the rotor blades to move up or down is a central feature of a gyroplane. A swash plate is not required; the complete rotor is swiveled for control. In addition, a conventional rudder is required for steering. Some models have additional wings . Propulsion is usually carried out by propellers with a piston engine ( reciprocating piston engine or Wankel engine ).

Gyroplanes only need a very short taxiing distance of a few to about a hundred meters and thus belong to the group of ESTOL aircraft. The landing distance between zero and a few tens of meters is even shorter . To shorten the take-off distance, the rotor can be accelerated to the start speed by another motor or a gear unit before it is started. Due to the low flight speed , a fixed landing gear is usually used. A closed cabin is only common for professional use; small lightweight gyroplanes for fair weather use do without it.

A special form is the compound autogyro , in which the rotor is only driven during take-off and landing, for example with a blade tip drive . During forward flight it then generates the lift by rotating freely, possibly together with the wings , with propulsion by normal propeller engines, as in the Fairey Rotodyne .

Since the rotor is only driven by the air flow, there is little mechanical stress on it and no complicated gearbox is necessary. The drive failure is also not critical. Gyroplanes do not have a minimum speed and can therefore not get into an excessive flight condition . That was also the motivation of the inventor Juan de la Cierva . The correct handling of these aircraft must still be well trained, because negative angles of attack are not permitted, as they - like too large angles of attack with other aircraft - can lead to a critical flight condition. Negative angles of attack are achieved by pressing hard on the control stick, which would lead to a flow of air onto the rotor from above; at the same time high propulsive power increases the effect.

Gyrocopter compared to helicopter and airplane 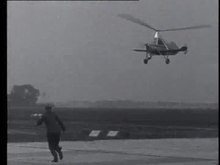 Play media file
Video with take-off, landing and flight sequence of a gyroplane from 1932

The basic principle of the gyroplane was first used by the Mallorcan Pere Sastre Obrador , but his attempts to fly failed. The Spaniard Juan de la Cierva developed the first working gyroplane , who called his aircraft Autogiro . After a bomber he had developed crashed because it was in an excessive flight condition , he developed an aircraft in which this condition cannot occur. In 1920 he began to experiment with "rotating wings", as he called them. The result was the first successful flight of an Autogiro, the C4 , on January 9, 1923 in Getafe , Spain. The C.6 followed in 1925 and the C.8 in 1928, whereby the developer found essential solutions for stabilizing the rotor of a rotary wing aircraft, which were later also used in helicopters, e.g. B. the flapping joints .

Since the new technology promised interesting applications, there was an "autogiro boom" by the end of the 1920s. Harold Pitcairn and his colleague Walter Kellett founded a company for the production of gyroscopes in the USA after being licensed by de la Cierva . They delivered their products to the US Post Office. However, with the recession this business collapsed.

In Germany, senior engineer Engelbert Zaschka developed a combined gyro and helicopter in 1927. In the development of Zaschka, in contrast to the gyroscopes and helicopters known up to that time, the rotors of the Zaschka rotary aircraft were inevitably connected to a rotating mass with two gyroscopes . This arrangement enabled a safe vertical gliding flight with the engine switched off .

After Juan de la Cierva's death in 1936, others were able to build on his successes and promote the development of the helicopter. In France, the gyroplane laboratory was further developed by Louis Bréguet and René Dorand, so that new world records could be set in 1937 on test flights supervised by the engineer and pilot Claysse.

During the Second World War , some German submarines carried the non-motorized towed gyroplane Focke-Achgelis Fa 330 "Wagtail". He was manned by a person who served as a lookout and was towed on a line behind the surfaced submarine.

In Great Britain, the air surveillance was calibrated with the help of gyroscopes. For this purpose, gyroplanes of the British type Cierva C.30 "Rota" were used in a flight squadron. In Japan, gyrocopter Ka-1 were used for artillery observation. It was also planned to use gyroscopes operating from converted freighters to defend against submarines. In the Soviet Union, five ZAGI A-7 gyroplanes combined in a squadron were used for reconnaissance flights and to drop leaflets at the beginning of the war .

Overall, gyroplanes did not play a significant military role. The military turned to the helicopter , which promised new tactical possibilities and a wider range of uses.

Gyrocopter for a sightseeing flight in Löchgau

Gyroplanes are often flown for recreational purposes, where they are popular because of their low purchase price and low operating costs . In October 2003, a gyroplane was granted type certification as an ultralight aircraft in Germany for the first time . Gyroplanes approved in this way can be flown there with a sports pilot license . Owners of such a license for conventional microlight aircraft have to take an additional examination, but it is also possible to complete the training exclusively on gyroplanes.

From 2009 to 2010 a world tour was made by gyroplane for the first time. The married couple Melanie and Andreas Stütz flew in various types of gyroplane through Europe, southern Africa, Australia, New Zealand, the USA and South America in 18 months. The adventure was documented in the book Weltflug - Two high-flyers on five continents and in the film Weltflug.tv - Die Weltflug mit Tragicopter .

Gyroplanes are basically suitable for certain police tasks (e.g. airspace surveillance) or for support in the context of disaster relief. Tests took place in Germany. In Iraq, gyroscopes are used for police purposes.

From July to December 2007, the Brandenburg police tested a rented gyroplane of the type HTC MT-03 at Saarmund airfield for its suitability for police operations . Four experienced officers from the state police were involved in the practical test. The test sections at different flight altitudes included a .:

The main motive for the use of gyroscopes is the low acquisition, operating and maintenance costs compared to helicopters . A helicopter flight hour costs an average of 1,000 euros, whereas a gyrocopter flight hour costs just 120 euros. Another advantage is that the ground can be easily observed on both sides. The top speed in police-related operations is 160 km / h, the minimum speed is 30 km / h.

The main problem with the tested gyroplane, however, turned out to be the low payload of a maximum of 210 kg. Furthermore, there is a legal hurdle in the aviation regulation, according to which populated areas with microlight aircraft and gyroscopes may not be overflown at low altitude. The Brandenburg Ministry of the Interior therefore planned an exemption for police flights. In a comprehensive final report on the successfully completed phase II of the project, a legal opinion on the "Use of gyrocopes by authorities with security tasks (police)" was prepared. As a result, no legal barriers to use were identified. The project was successfully continued in a third phase up to the decision of the Interior Minister.

In February 2010 the new interior minister of Brandenburg, Rainer Speer (SPD), had the project started by his CDU predecessor discontinued.

In 2012, the DLR ( German Aerospace Center ) tested the use of gyroscopes to combat disasters (primarily as a reconnaissance aid ) together with the THW .

The Koblenz University of Applied Sciences is researching airborne sensors with the help of a gyroplane.

In May 2019, the Tensor 600X gyroplane, developed for commercial purposes, was presented. The first flight of the machine was successfully completed in January 2020. The market launch by Fraundorfer Aeronautics AG is planned for 2020.

Several projects have been implemented in the Autonomous Region of Kurdistan ( Iraq ) since 2009 . In 2010 the first gyroplane was handed over to the Kurdish Interior Minister Karim Sinjari. The aim of the projects is to train pilots who monitor the arrival and departure routes of the airports in Erbil and Sulaimaniyya for the Ministry of the Interior in order to protect against terrorist attacks.

These pilots trained on the gyroplanes form the backbone of the entire pilot crew of the Kurdish police. In the next step, they will be trained to become helicopter pilots (on Eurocopter EC 120 B ).

Little Nellie, the collapsible gyroplane from the movie James Bond 007 - You Only Live Twice

Already in 1934 plunged Autogyro in the film It Happened One Night on, as in The 39 Steps of 1935. the gyroplane through was especially famous James Bond - movie You Only Live Twice ( "Little Nellie") and by Mad Max 2 .

In the TV series The A-Team , HM Murdock flies a gyroplane at the beginning of the last season and justifies it with the words: “I saw that in a James Bond film. Since then I've always had a helicopter in my suitcase. "