In the accompanying diagram shows the relationship between angle α and the coefficient of dynamic lift C L shown. It can be seen that as the angle of attack increases, the lift initially also increases, then reaches a maximum and then decreases again. The reason for this is that when the maximum lift is reached, the flow begins to detach from the profile. If the angle of attack is increased further, the flow will be completely interrupted . This greatly reduces the lift.

Angle of attack or pitch are occasionally confused. The angle of attack should not be confused with the setting angle (the angle between the chord and aircraft or the propeller axis). 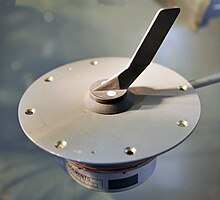 In a few of the aircraft angle of attack is no attitude change on changing the setting angle of the wing relative to the aircraft fuselage controlled z. B. the Vought F-8 . The angle of attack also changes if the profile is changed by extending slats or flaps or if it moves due to updrafts or downdrafts. Beyond the critical angle of attack, the lift can be increased by strakes .

Propellers and fans have large angles at the hub and small at the tip, so that the angle of attack remains as homogeneous as possible.

Modern wind turbines use the change in the angle of attack of the rotor blades to regulate power. The aerodynamic efficiency of the rotor is adjusted by reducing the lift so that the nominal power of the generator is not exceeded.

In sailing, choosing the right angle of attack is an important part of sailing trim . The angle of attack of the sail must be matched to the current sail profile (curvature of the sail), since, in contrast to conventional wings, it is changed by the use of trim devices or passively by increasing or decreasing wind pressure.