Volumes of the second edition of the Great Soviet Encyclopedia

The Great Soviet Encyclopedia ( Russian Большая советская энциклопедия , abbreviated БСЭ / Bolschaja sovetskaja enziklopedija (BSE) ) is the best-known and most extensive Russian-language encyclopedia . It appeared in the Soviet Union with a total of three editions:

The content of the first edition was geared towards the needs of the young Soviet Union, with articles on the subjects of “economy, contemporary politics and Soviet practice” dominating.

The foreword said: "The focus of attention is the USSR, the development of our economy and our form of government, but also the international revolutionary movement."

The editor-in-chief was the natural scientist Otto Schmidt from 1924 to 1941 . Among the authors were Nikolai Bukharin , Kliment Voroshilov , Anatoly Lunacharsky , Mikhail Frunze , Nikolai Maschkin and many others. International authors were also asked; so the article on Goethe comes largely from Walter Benjamin .

Each volume of the first edition contained an average of eight to ten colored maps and up to 20 mostly colored illustrations on separate sheets. In addition to these, there were numerous drawings and maps within the text pages. These were mainly executed by well-known artists using wood engraving .

The articles in this edition are in the public domain in Russia .

The publication of the second edition of the Great Soviet Encyclopedia was decided by the Council of Ministers of the USSR in February 1949 . The strict ideological orientation was formulated in the resolution:

“The superiority of socialist culture over the culture of the capitalist world must be shown with exhaustive completeness. Based on the theory of Marxism-Leninism, the encyclopedia is intended to provide a critique of the current reactionary bourgeois tendencies in the various fields of science from the point of view of the Communist Party. "

The volumes appeared from 1950 to 1958 in the Moscow State Science Publishing House "Great Soviet Encyclopedia" with a circulation of 250,000-300,000 copies. The encyclopedia consisted of 51 volumes, of which the 51st (USSR) was a supplementary volume . In 1960 an alphabetical index of subjects and persons appeared in two books. The volume corresponded to around 107,800 A4 pages.

The foreword to the second edition looked back on the first:

“The first edition of BSE does not, of course, reflect the extensive changes that have taken place in the lives of the peoples of the Soviet Union and the rest of the world, nor the current state of Soviet science, technology and culture. A significant number of the articles in the first edition are obviously out of date. In addition, many articles contain gross theoretical and political errors. "

In addition to detailed overview articles (for example on the Union republics, foreign states, science, etc.), this edition contained numerous medium-length and short articles; an article had an average of 2000 characters. This made it possible to include around 100,000 lemmas . More than 40 percent of the articles contained bibliographical information, most of them in their original language (in the 35 languages ​​within the Soviet Union and in 25 foreign languages).

In the second edition there were 40,852 illustrations and 2,363 maps; the cover was embossed.

The editors-in-chief of this edition were Sergei Wawilow (1949–51) and Boris Vwedensky (1951–69). Andrei Kolmogorow and many other scientists were also involved as authors.

The volumes of the second edition are in the public domain up to and including the 27th volume ( А to Многоножки ), as they were published until July 1954. The remaining volumes are protected by copyright in Russia. 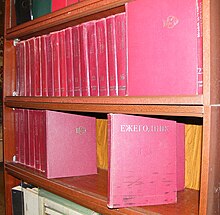 After a decision by the Central Committee of the CPSU on February 2, 1967, work began in the same year on the third edition of the Great Soviet Encyclopedia. The edition contains 30 volumes (volume 24 in two books). The supplementary volume (the second book of the 24th volume) is dedicated to the USSR. With a circulation of around 630,000 copies, this edition was published between 1969 and 1978.

Compared to the second, this edition focused on philosophical questions in the natural sciences, the growing influence of physics and chemistry on all natural and technical areas and the widespread use of mathematical methods in economics, sociology, linguistics and other branches of science.

The encyclopedia was richly illustrated and the individual volumes contained colored blackboard and map pages produced using gravure, letterpress and offset printing , fan-fold cards and illustrations, maps and diagrams on the text pages. A record containing recordings of Lenin's speeches was enclosed. 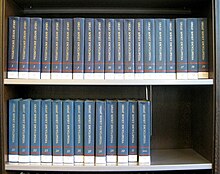 The third edition of the encyclopedia was translated into English and published by the British-American publisher Macmillan 1974–1983 (other sources: 1973–1982). Each volume has been translated separately, the order of the entries is based on the Russian alphabet. It was also translated into Greek.

Between 1957 and 1990 a volume was published every year with current information on the Soviet Union and other countries around the world.

The owner of the printing rights is the legal successor of the publishing house Soviet Encyclopedia, the State Publishing House Great Russian Encyclopedia (BRE). The electronic (partial) rights of use have been contractually transferred to several companies: the exclusive right to Internet publication belongs to Russ Portal, which markets it on the Rubrikon website , the rights to multimedia exploitation (CD-ROM) to Novy disk u. a.

In 2001 the Russian stock corporation Autopan , founded in 1993, published the third edition of the encyclopedia on three CDs.

Articles from the third edition that appeared in the English language edition (1970–1979) are available from TheFreeDictionary.com , but not all of them.

Of a German-language edition ( Die Große Sowjet-Enzyklopädie ), only the first volume with the keyword Germany, edited by Jürgen Kuczynski and Wolfgang Steinitz, was published in 1953 by Aufbau-Verlag .

During and after the time of Josef Stalin , the encyclopedia became a problem when a contemporary suddenly subjected to the damnatio memoriae was given too extensive or positive appreciation in the encyclopedia. The journalist Wolfgang Leonhard reports that after Khrushchev's well-known secret speech " On the personality cult and its consequences " the subscribers to the Soviet encyclopedia were asked to separate the pages with the keyword " Beria ", Stalin's secret service chief, and to exchange them at the publisher - extensive papers came back for Bering Sea theme (→  censorship in the Soviet Union ).