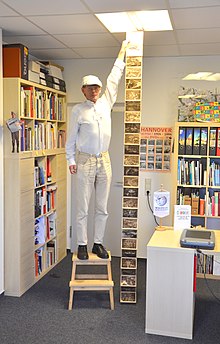 The leporello , also called folding book , is a foldable booklet in the form of a long strip of paper or cardboard that is folded together like an accordion . It is mainly used for photo and picture series, leaflets and brochures.

The name goes back to Mozart's opera character Leporello, the servant of the woman hero Don Giovanni (Don Juan), who keeps a list of all his amours for his master. Leporello reports about it in the so-called register aria . According to the performance tradition, he effectively unfolds this list on stage. There is no information about this in the libretto, except that the list referred to as “catalogo” is referred to as “non picciol libro”, ie as a “not [exactly] small book”.

The alternating stacking of folded sheets of cosmetic or paper towels is comparable to the endless fanfold.

With the magnetic fanfold, usually the size of a credit card, the zigzag-folded content is held together between two magnetic sheets.