A calendar is an overview of the days , weeks and months of a year . An obsolete term is Jahrweiser .

The word "calendar" comes from the Latin calendarium (debt register). This was a list of the Kalendae , the first days of the ancient months to be called out ( calare “to call out”). At these were loans disbursed and loan repayments and interest receivables due.

There are different calendar systems , today the Gregorian calendar is predominantly in use worldwide .

The rules for setting up calendars are based on astronomical conditions ( moon phases , solar year ) and corresponding calendar calculations . Scientific calendar science is a branch of astronomical chronology . The pre-scientific art of creating calendars is called hemerology.

Origin of the calendar system

Knowledge of regular animal migrations was already important for the early hunter cultures .

An awareness of seasonal and astronomical recurring events, of corresponding cycles in their environment, is likely to have occurred to man very early on. This included the change between day and night and the phases of the moon. Seasonal climate fluctuations played in the agriculture an important part of most regions of the world and could not later than the man Paleolithic are perceived. It was also possible to observe the changes in the night sky and the planets' own movements at this time.

The tower of Jericho from the 9th millennium BC. Chr. Indicates the knowledge of the summer solstice and Neolithic buildings such as Stonehenge testify to the efforts of the settled population to be able to precisely determine the natural length of the year and selected cyclically recurring celestial events such as the solstice and equinox . Especially for agriculture was important, one of the specific weather conditions independent determination of the dates for From sowing and harvesting to make. The systematic observation of the sky was linked to religious fertility cults - supported by the hope of a favorable return of fertility conditions. So certain agricultural dates were linked to festivals, which in turn were linked to celestial events. 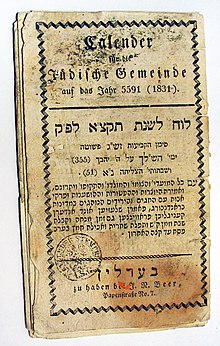 The oldest calendars still known today come from the early advanced civilizations of Egypt and Mesopotamia . The oriented to the phases of the moon: Here already two basic types of calendars that characterize most calendar systems today showed lunar calendar and the astronomical calendar , which the course of celestial bodies reflects.

The seven-day weekly cycle was developed by the Babylonians at the latest , which today regulates everyday life almost worldwide. In other calendars there were similar cycles, between five and ten days.

The adjustment of weeks and monthly sequences to the fixed size of the astronomical year was not easy to solve. Different calendar systems developed .

Early calendar systems were obtained through observation ( astronomical calendars ). With the occurrence of certain defined sky event (. As of such new moon or the day and night are equally long in spring) started a new cycle. They had to be readjusted regularly.

This method had a decisive disadvantage: in large mansions an event could possibly be perceived in different places at different times, so that different dates were counted. If, on the other hand, the occurrence of an event was only decisive in a certain place (e.g. the capital or the main temple), then areas far away could often only be informed about it after days. Such problems existed, for example, in the earlier Jewish calendar , where the high priest decided on the first sighting of the crescent moon at the new moon. Due to the long information channels, it could happen that a religious festival was celebrated on the “wrong” day in remote areas. Also, shortly before the end of the month, it was not possible to predict which date, e.g. B. would be in seven days because the new moon was not calculated in advance, but determined by daily observation.

More and more cultures therefore began to calculate their calendars. The last serious attempt to establish an observational calendar was made in the French Revolution ( French Revolutionary Calendar ).

The calculation of calendars ( arithmetic calendars ) requires extensive astronomical and mathematical knowledge. This knowledge was present during the development of the early Egyptian astral Sothi calendar . The introduction of an Egyptian administrative calendar on a 365-day basis followed in the third millennium BC at the latest. However, this could not prevent the passage through the seasons . The Egyptian kings criticized the seasonal shift, but only Ptolemy III. undertook in 238 BC An attempt to introduce a leap day . After his death, however, the old Egyptian administrative calendar was used again in addition to the new leap day calendar. The Julian calendar , dating from 45 BC. Was introduced by Julius Caesar , nevertheless relied on the calendar form of Ptolemy III.

Both lunar and solar calendars have to work with leap days or different month lengths that are inserted into the normal calendar run according to a fixed mathematical rule. A solar calendar usually requires an additional day approximately every four years (in the Gregorian calendar this is February 29 ) to adjust the average number of days to the length of the solar year . A lunar calendar has to vary the length of the month between 29 and 30 days, because the time between two identical phases of the moon lasts about 29,531 days on average.

The insertion of an additional day, month or year into a calendar system is called embolism ( ancient Greek ἐμβάλλειν "to switch on").

Lunar or lunar calendars are based on the phases of the moon . The German word month is etymologically derived from moon . However, apart from the name, the month of the Gregorian calendar has nothing to do with the lunar cycle, as it is almost a day longer than the average synodic month, with an average length of 30,437 days .

The disadvantage of a pure lunar calendar is that it cannot correspond to the solar year , a property that in subtropical and tropical latitudes often does not have the same significance as it is in cultures that depend on the seasons. In the most famous lunar calendar still in use today, the Islamic calendar , the year with 12 months lasts on average 354.372 days. As a result, the Islamic months "move" forward by eleven days in the Gregorian calendar year after year. The Easter date also follows a lunar calendar (see: Computus (Easter bill) )

Most cultures based their time measurement on the seasons determined by the sun (solar or solar calendar). Accordingly, the basic type of solar calendar has produced the most variants. The solar year is based on the tropical year , which at the vernal equinox related circulation of the earth around the sun. This is the starting point for the general year term . The Gregorian calendar, which is used worldwide today, is a solar calendar.

Only a few calendar systems are known that are neither based on the moon nor the sun. The astronomical Egyptian calendar was based on the very bright star Sirius . The Mayan calendars were based on a regular sequence of 20 days and a calendar round lasting 52 years .