The title of this article is ambiguous. Further meanings are listed under Week (disambiguation) . 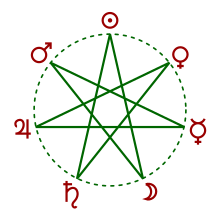 Weekdays heptagram with the symbols of the weekdays : sun (above), moon (below right) and further along the line to Mars, Mercury, Jupiter, Venus, Saturn

The week today is a common time unit of seven days in almost all cultures . In most countries, however, it is neither a legal unit nor a physical unit of measurement in the sense of a system of units . Nevertheless, according to the German Civil Code (e.g. § 188 Paragraph 2) and the Swiss Code of Obligations (Art. 77 Paragraph 1 Item 2 OR), deadlines can be specified in weeks, whereby in Germany the week is usually Monday 0: 00:00 to Sunday 24:00 is defined ( Section 21a of the Working Hours Act ).

According to the recommendation made by the International Organization for Standardization (ISO) in 1975 , the days of the week have had the following sequence since January 1976: Monday , Tuesday , Wednesday , Thursday , Friday , Saturday / Saturday and Sunday .

According to Jewish and Christian tradition, the week starts on Sunday. The same is done today in the USA, Israel, Arab countries, Japan and China. The German term "Wednesday" also refers to a week beginning on Sunday and not on Monday. However, the calendars of most European countries mark Monday as the first day of the week, as provided for in the ISO 8601 standard . According to old Persian tradition, the week begins on Saturday.

The word week is related to the words turnout and change .

The combination of seven days into a unit of one week can be explained with the length of a month ( moon ), which comprises a little more than 28 days. The four moon phases ( new light after new moon, waxing crescent moon, full moon , waning crescent moon, new moon ) then allow an obvious division of the 28 days of the month into four weeks of seven days each. An old naming and order of the days of the week comes from Babylonia and Egypt , where already in the Old Kingdom (3rd millennium BC) the month was divided into the four phases of the moon and related religious sacrifices were made. A deity was assigned to each day, and a day of the week was assigned to each of the movable celestial objects known at the time (sun, moon, Mars, Mercury, Jupiter, Venus and Saturn).

In the oldest written Torah - and thus also the Bible - traditions ( 5th century BC ) a seven-day week is explicitly mentioned, whereby the first six days are designated with numbers, while the seventh day is the general "day of rest" is highlighted, see Gen 2.2  EU . It has not yet been clarified whether the tradition of the Torah was linked to the seven-day week from the beginning or whether two originally separate traditions were only linked later. The name Sabbath for the “day of rest”, on the other hand, is attested much later. The name derivation is also not clear. Modern research discusses on the one hand the origin of the Hebrew term šbt ("stop, let off work, celebrate") and on the other hand the Babylonian equivalent šapattu (moon festival). According to Christian tradition, most Christians celebrate the first day of the week, Sunday (the day of the sun; day on which sacrifices were made to the sun god) as the commemoration day of the resurrection of Jesus of Nazareth. The commandment to keep the Sabbath day holy is reinterpreted in this sense (“You are to keep the holiday holy”).

In ancient times , the Egyptian-Babylonian zodiac was divided between the Greeks and Romans. This name tradition was soon transferred to India and Japan (see also Japanese weekdays ).

When and by whom the counting of the days of the week, which is still common today, was first established cannot be traced.

Today's seven-day week replaced the ancient Roman Nundinum under oriental influence , possibly significantly through the calendar reform of Gaius Iulius Caesar in 45 BC. In legal terms, however, the 7-day week can only be made legally binding with Emperor Constantine from 321 AD in the legislation on freedom of work and court days on Sundays.

There is no evidence that the sequence of the seven days of the week has ever been interrupted since its inception, not even by the calendar reform of the Gregorian calendar . This makes it the most regular part of the Julian and Gregorian calendars.

The calendar year comprises at least 52 weeks. a. in business life are numbered consecutively as calendar weeks (KW), whereby there are different definitions for the week numbering. Depending on the rule applied, the first week of a year can be set differently:

Counting according to ISO 8601

The calendar week is defined according to ISO 8601 as follows:

Further characteristics of this counting method are:

In Germany, the leading German institute for standardization with the DIN 1355-1 an appropriate counting with Monday as the first day of the week in Germany on January 1, 1976th In the previous version DIN 1355 from 1943, the week started on Sunday. In calendars for German-speaking countries, the calendar week is always counted according to ISO 8601, even if Sunday is sometimes shown as the beginning of the week.

In March 1975, DIN recommended for the Federal Republic of Germany to assign the ordinal number 1 to the weekday Monday (DIN 1355); this has led to the custom of viewing Monday as the first day of the week and thus the beginning of the week. Before that, there had been a regulation in German standards since January 1943: "A week begins on Sunday at 0:00 and ends on the following Saturday at 24:00". In the GDR , this change came into effect in 1969/1970. In 1978 the UN decided that Monday should be considered the first day of the week internationally.

Calculation in the USA and many other countries

In large parts of the world (e.g. North America, Australia) the Judeo-Christian tradition has been preserved of counting Sunday as the first day of the week. In the USA and countries that also use the scheme valid there, the following rules apply:

From this, some properties can be derived:

In US business life and in public communication there, calendar weeks in the form of consecutive numbers as above are rarely used. Instead, a week is usually denoted by its Monday, e.g. B. week of June 20 .

Permanent calendar including reading of the day of the week

Other systems for short periods of time

The seven-day week system has established itself today in all large cultures, such as arithmetic with ten digits. In earlier cultures there were other systems of counting the day:

There was a second sacred calendar with 260 days, the so-called tonalpohualli , which was used for prophecies. The 260 days were divided into 20 weeks of 13 days each. Each day was assigned to a god (or a goddess). People's fate depended on whether their birthday was assigned good or bad qualities. For example, "Seven Rain" was a good day, "Two Rabbits" a bad day.

The Triwara is the usual cycle of market days in Bali: every third day is market day in a village.