The title of this article is ambiguous. Further meanings are listed under Month (disambiguation) .

A month (masculine, etymologically related to the moon ) is a unit of time and part of a year .

Depending on the definition , a month is of different duration:

The category: Month gives an overview of many uses

The unit symbol is M or mon.

The term "month" is used to denote time periods in the calendar system: 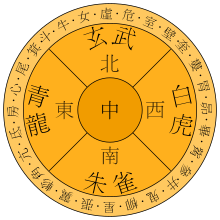 Lunations - or their mean value, the synodic month - based on the same phases of the earth's moon formed the basic building blocks of the first calendars, which were lunar or lunar calendars , and were later partially developed into lunisolar calendars . Such calendars are still in use today in much of the world, and the Jewish calendar , the Islamic calendar and the traditional Chinese calendar , for example , continue to refer to a phase cycle of the moon as a month.

However, there is an innumerable number of lunar months in the time of a solar year , so that the length of the months had to be adjusted accordingly when a solar or solar calendar was introduced . Such a link between the length of the year and the duration of the earth's orbit around the sun and the associated separation of the months from the course of the moon first occurred in ancient Egypt in 238 BC. And was founded by Julius Caesar in 46 BC. BC also adopted for the Roman Republic (with which these years would actually be meaningful epochs for the time calculation of the Julian-Gregorian calendar).

Since 12 lunar phases last about 354 days, making this Earth's lunar year shorter than a solar year, many lunar calendars add an additional month at regular intervals. The details vary between the calendars, e.g. 7 such leap months are spread over a period of 19 years according to the Meton cycle . In any case, they occur more frequently than leap days in solar calendars . In the Julian and Gregorian calendars, February is sometimes referred to as the "leap month" in leap years .

Today, the term "month" in the Gregorian calendar only refers to fixed annual periods, the length of which differs more or less from that of a lunar cycle .

Since the Julian-Gregorian calendar from the Roman Empire was adopted in German-speaking countries, the month names used today are also of Latin origin, and most of them can be traced back to the ancient Roman calendar .

There have been various attempts to introduce their own month names, in the German-speaking area, for example, by Charlemagne in the 8th century, and again by the German Language Association in the 1920s. However, these terms could not hold up and are now only reflected in poetry ( happy month of May , spring is here , etc.). The names of the months in the French revolutionary calendar , which, like the German names of the months, were based on natural phenomena and seasons, could not establish themselves either.

The month as the period of the earth's moon on its orbit around the earth .

Lunation
The length of time from one new moon to the next. The lunation is the actual occasion for the concept of the month.
Due to the complicated movement of the moon, it fluctuates between 29 days 6.5 hours and 29 days 20 hours.

In astronomy , the time span between two repetitions of an event that is related to the orbit of any moon around its planet , i.e. each complete orbit, is generally referred to as a month . In this respect, the term “month” is synonymous with the orbit period .

In the solar system , these periods of time last from just a few hours to several earth years, depending on the moon.

If used frequently or if space is limited, the month names are either shortened to three to four letters or, like the day and year, are written as digits, earlier often also in large or small Roman numerals to differentiate. In the case of variants with three initial letters for the abbreviations, the actually mandatory abbreviation point is often omitted , especially since it is not necessary for May anyway.

The national appendix to DIN ISO 8601 specifies Mar instead of Mar as the abbreviation for March in order to avoid coding problems with the umlaut. The German universal dictionary of the Duden publishing house gives abbreviations of variable length. In Austria the first month is also abbreviated Jan.