German controversy for the throne

Philipp von Schwaben has since the death of his brother Emperor Heinrich VI. led the regency for his son Friedrich II, who was crowned king in 1196 . When he realizes at the beginning of the year that his nephew's four-year-old nephew's claims to rule cannot be enforced, he tries to secure the crown of the empire for himself. Meanwhile, the English King Richard I proposed his nephew Otto von Braunschweig , the Duke of Aquitaine , as a candidate. The Saxon princes perceive this candidacy as a threat because they owe a large part of their possessions to the overthrow of Otto's father Heinrich the Lion and fear retributions if the Guelph is elected . The Saxon Duke Bernhard III. then withdraws his own promising candidacy and announces his support for the Staufer Philipp.

On March 8 is Philip of Swabia elected by the Hohenstaufen minded prince Roman-German king. However, he failed to quickly catch up with the coronation and to assert his kingship by issuing certificates. Favored by this , the anti-Staufer princes elect Otto von Braunschweig as the opposing king on June 9th .

Sarcophagus of Constanze in the Cathedral of Palermo 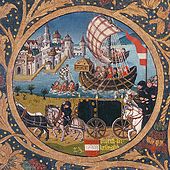 The corpse of the crusader Friedrich I is transported back to Austria. ( Babenberger family tree , around 1490, Klosterneuburg Abbey)