General view of the Cathedral of Palermo

The Cathedral of Maria Santissima Assunta (Most Holy Mary Assumed into Heaven) in Palermo is the cathedral of the Archdiocese of Palermo of the Roman Catholic Church in the ecclesiastical region of Sicily . It is located near the Norman Palace . The current building was built in 1184/1185 in the Norman-Arabic style and has undergone several alterations over the centuries. Due to its first construction period, it is also known as the Norman Cathedral. The cathedral is of particular importance for Germany, as the graves of the Hohenstaufen emperor Heinrich VI are located there . , Friedrich II.and Queen Constance of Sicily .

A cathedral was built on the site of the current building in the 6th century under Pope Gregory the Great . The Arabs had converted this cathedral into a mosque . This “Great Mosque” of Palermo not only included the house of prayer for Friday prayers, but also a college ( madrasa ), libraries, baths, etc. After the conquest of Palermo by Roger I , the mosque became the seat of the archbishop again .

When the old cathedral was badly damaged by an earthquake in 1169, Archbishop Walter decided to tear it down and rebuild it. The new building was built between 1184 and 1185. Not only was the original cathedral demolished, but also the outbuildings belonging to the Great Mosque.

In the 14th to 16th centuries, the building was continuously expanded. The four corner towers, which originally did not protrude over the central nave, were given a Gothic tower. The main entrance was moved from the west facade to the south side of the cathedral, and a large forecourt was created in front of it. The south portal received a portico in the Catalan late Gothic style around 1465 .

Baroque domes over the aisles

From 1781 to 1801, Ferdinando Fuga fundamentally changed the exterior and interior appearance of the cathedral through a large-scale renovation. Fuga built a classicist dome over the crossing and replaced the roofs of the side aisles with a series of smaller domes, which now cover the outer facade of the central nave. The interior of the cathedral was also rebuilt in the classicist style. The columns, which stood in groups of four on a base between the central nave and the side aisles and supported high pointed arches, were replaced by massive pillars and circular arches. In addition, the large reredos behind the altar, which was decorated with 38 statues of saints, the work of the Gagini family of sculptors from the beginning of the 16th century, were removed . Some of the statues were returned to the cathedral in 1950 and placed on the pillars.

When the old fortified tower in front of the west facade was given a neo-Gothic tower, the cathedral underwent the last major renovation in the 19th century.

At its core, the cathedral is a Norman fortified church in the form of a cube with a central nave, a transept and two lower aisles. Since the construction with two side towers on the westwork was reserved for the royal domes, Bishop Walter had a large tower built in front of the west facade, which is only connected to the main building via pointed arches. Small corner towers stand at the four corners of the church.

The Arab influence can be clearly seen on the three apses. Crossing blind arcades with stone inlays are designed in a similar way to those of the Monreale Cathedral, which was built around the same time , but appear stricter in style.

The large dome Ferdinando Fugas is characteristic of the external impression. The smaller domes over the side aisles also alienate the Norman-Arab overall impression.

The south portal, which today serves as the main entrance from the forecourt, was built in 1426 by Antonio Gambara , the wooden door with carved figures by Francesco Miranda dates from 1432. The late Gothic portico in front of the south portal is made up of two smaller towers flanked. In the pediment of the portico, Christ is enthroned between Mary and the Archangel Gabriel. In 1989, during renovation work, part of the original portico was exposed, on which a filigree tree of life is depicted. 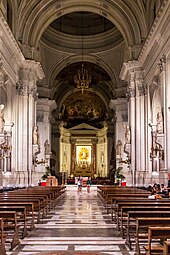 The interior is characterized by the renovation at the end of the 18th century and shows a classicist pillar basilica over the plan of a Latin cross . The columns that originally supported the arches between the main nave and the side aisles are hidden in front of the pillars. On the pillars there are also some of the figures that originally adorned Gagini's reredos.

Other valuable sculptures are the marble statue of the Madonna and Child by Francesco Laurana (1469), the holy water font behind the fourth pillar, formerly attributed to Domenico Gagini , and the Madonna della Scala by Antonello Gagini (1503) on the altar in the new sacristy .

To the right of the presbytery is the Chapel of St. Rosalia . The relics of the patron saint of Palermos are kept here in a silver urn from 1632 . Other silver urns contain the relics of St. Cristina and St. Ninfa.

The sarcophagi of the Archbishops of Palermo are placed in the crypt. Some of these are reused Roman sarcophagi. 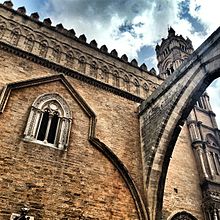 View of the cathedral from the Museo Diocesano

On the floor in front of the chancel there is a meridian that the astronomer Giuseppe Piazzi had installed in 1801. It is a kind of sundial with which Piazzi wanted to popularize the more modern division of hours based on the sunny day compared to the traditional “all'italiana” division . The light of the sun, which falls through a small opening in one of the domes in the aisle, crosses a brass line set into the floor and running exactly north-south, always exactly at 12 noon. Due to the changing position of the sun in the course of the year , the solstices , the equinox and the signs of the zodiac can also be read, which is also important for determining the date of Easter .

The organ was built by the organ builder Tamburini in the 1950s. The instrument has 57 registers on four manuals and a pedal . The actions are electric.

Since the renovation in the 18th century, the royal tombs have been placed in a side chapel in the back of the right aisle. Originally they stood to the right and left of the main apse. 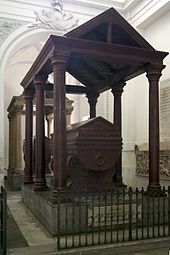 Sarcophagi of Henry VI. and Constance

In the front row there are two porphyry sarcophagi under canopies supported by six porphyry columns, on the left the sarcophagus of Friedrich II. († 1250), on the right that of his father Heinrich VI. († 1197). These two sarcophagi had been commissioned by Roger II in 1145 and placed in the transept of the cathedral of Cefalù . While one was intended as his burial place, the other was to remain empty “as a symbol and in memory of my name ”. But after Roger II had been buried in Palermo and his two successors Wilhelm I and Wilhelm II in the Cathedral of Monreale , Frederick II had brought the sarcophagi to Palermo for himself and his father in 1215.

The sarcophagus of Frederick II is particularly elaborate. It is carried by double lions, which were a favorite motif of Rogers II and u. a. are also depicted in the mosaic of the Rogers room in the Norman Palace and on the coronation mantle . In this sarcophagus, in addition to Friedrich II., The kings Friedrich III. († 1338) and Peter II († 1342) are buried. When the sarcophagus was opened in 1782, the body of Frederick II was found intact. Since he was first transferred to Messina after his death in Castel Fiorentino near Lucera and was not buried in Palermo until February 1251, treatment to prevent putrefaction must be accepted. The fact that the corpse was still preserved 500 years later is in this case less due to the conservation methods used , but rather to the favorable climatic conditions that favored the natural preservation of the body, as numerous other finds in the Palermo area show.

In the second row there are two more porphyry sarcophagi under canopies supported by six columns decorated with mosaics, on the left that of Roger II († 1154), on the right that of his daughter Constanze of Sicily († 1198), the wife of Henry VI. and mother of Frederick II.

In a Roman sarcophagus from the 3rd or 4th century on the right wall are the bones of Konstanze von Aragón († 1222), the wife of Frederick II.

Camel auction of Constance of Aragón

The access to the treasury is to the right of the chapel of St. Rosalia. Mainly liturgical vestments are exhibited in the treasury.

The showpiece of the collection is a crown that was modeled on the crown of the Byzantine emperors ( Kamelaukion ). The side hangers (pendilies) are characteristic. Frederick II had given this crown to his wife Constance of Aragón in the grave.