The title of this article is ambiguous. For the racing driver, see Giuseppe Piazzi (racing driver) . 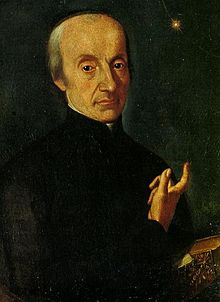 Giuseppe Piazzi points to the "planet" Ceres, which he discovered. Painting by Giuseppe Velasco (1750–1826).

He worked in northern Italy , Rome and Sicily , where he discovered the first asteroid at the Palermo observatory in 1801 , the Ceres (first considered a comet , then classified as a planet , from around 1850 as the largest asteroid (asteroid) and since 2006 as a dwarf planet designated).

Giuseppe Piazzi came from a large family from Valtellina . He was the ninth of ten children. At the age of eleven, his parents sent him to the seminary in Como . In 1763 he continued his studies in Milan , where he attended, among other things, the Jesuit school in Brera, where he was taught by Girolamo Tiraboschi .

In 1765 he joined the Theatine Order . As a result, he was sent by his superiors to the University of Turin to study philosophy . In Turin he made the acquaintance of Giambatista Beccaria and began to study mathematics and physics. In 1768 he went to Rome to the Theatine Monastery of Sant'Andrea della Valle , where he finished his theology studies, at the same time he continued his physics studies and became a student of François Jacquier .

After his ordination as a priest in 1769, he went to Genoa and taught philosophy there. In 1772 he was entrusted with the chair of mathematics at the University of Malta . A year later, Piazzi was called to Ravenna and taught mathematics and philosophy there. In 1779 he worked as a preacher in Cremona and Venice before he was appointed lecturer of dogmatic theology at the monastery of Sant'Andrea della Valle at the end of the year. In the monastery he met Padre Barnaba Chiaramonti, the later Pope Pius VII and the poet Vincenzo Monti .

At the beginning of 1780, Piazzi received the chair of calculus at the royal academy in Palermo . In 1786 the Viceroy of Sicily, Francesco Tomaso d'Aquino, entrusted him with the chair of astronomy. The following year he received permission from King Ferdinand I to go to London and Paris to deepen his astronomical studies.

From February 1787 he attended the lectures of Jérôme Lalande at the Collège de France for about six months . During his stay in Paris he met Pierre-Simon Laplace and Joseph-Louis Lagrange . In September of the same year he traveled to London and worked there with the court astronomer Nevil Maskelyne , with whom he observed the solar eclipse on June 3, 1788. In London he used to associate with Wilhelm Herschel . From the optician Jesse Ramsden , Piazzi commissioned a universal instrument for the observatory to be built in Palermo.

In the summer of 1789 he began his return journey to Palermo. On the way back, he stayed in Milan for some time and exchanged views with Barnaba Oriani about his experiences at the Brera Observatory . At the end of the year he finally arrived in Palermo. In the following months he devoted himself to the construction of the observatory in Palermo , which was built on one of the towers of the Palazzo dei Normanni between 1790 and 1791.

In 1792, Piazzi began working in the new observatory. In the same year he published his results in a four-volume work entitled Della Specola astronomica de 'regi studj di Palermo .

When he determined precise star locations in an astrometric project , he succeeded in discovering the first asteroid in the solar system on January 1, 1801 . At first he thought it was a distant comet , but after a few weeks he recognized a planetary orbit . The almost 1000 km large celestial body was named by Piazzi in honor of King Cerere Ferdinandea and a little later received the shortened name of the Roman earth goddess Ceres . After 41 days it was lost due to the decreasing distance to the sun, but was found again at the end of the year according to an analysis by the young Carl Friedrich Gauß .

In 1803 Giuseppe Piazzi published the first star catalog with 6748 entries. According to unanimous contemporary opinion, the work was described as the first methodologically designed star catalog. In 1811 the sundial designed by Piazzi was inaugurated in the Cathedral of Palermo . In 1814 the expanded edition of his star catalog was published with 7646 entries. Between 1817 and 1822 he stayed several times in Naples to direct work on the construction of the Capodimonte observatory . In 1824 he took over the office of President of the Academy of Sciences in Naples.

The asteroid (1000) Piazzia and the lunar crater Piazzi are named after him.