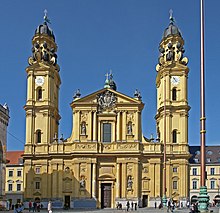 The order was founded in 1524 on the initiative of Gian Pietro Carafa, later Pope Paul IV, and by Kajetan von Thiene . Both were previously members of the Compagnia del Divino Amore brotherhood , belonging to the Church of Santa Dorotea . After just a few weeks, the community was recognized as an order by Pope Clement VII . The Congregation of Regular Clerics (the first of its type) quickly spread throughout Italy and became the most important force of the Counter-Reformation alongside the Jesuits . The mother church of the Theatines is still Sant'Andrea della Valle today .

In addition to 250 bishops and 6 cardinals, the Theatine order also produced a pope: Gian Pietro Carafa was elected in the conclave on May 23, 1555 and officiated as Paul IV.

In 1662, the Bavarian electoral couple Ferdinand Maria and Henriette Adelheid von Savoy brought the order to Bavaria and founded a convent and a magnificent church in Munich. The order still had a great influence at the electoral court until the time of Max Emanuel. The Theatine father Don Antonio Spinelli not only confessed Henriette Adelheid , but also her eldest daughter Maria Anna Christina , before she became the Dauphine of France, and Max Emanuel. The active Spinelli accompanied the Blue Elector on all of his Hungarian campaigns. The Theatinerkirche St. Kajetan - built according to the plans of Agostino Barelli and Enrico Zuccalli (based on the model of Sant'Andrea della Valle) directly opposite the electoral residence on Odeonsplatz - subsequently served as the court church and burial place of the Wittelsbachers . The versatile Spinelli also played a notable role in its construction. Its facade was designed in the 18th century by François de Cuvilliés the Younger . Today the church is one of the most famous sights in Munich .

Also in Prague, Salzburg (see Kajetanerkirche ) and Vienna branches of the Theatine order were founded in the 17th century.

The Generalate of the Regular Clerical Community is today in Rome . In 2007 it had 203 members, including 139 priests , in 33 branches. The current Superior General Valentín Arteaga y Sánchez-Guijaldo succeeded Gabriele Darida in 2003.