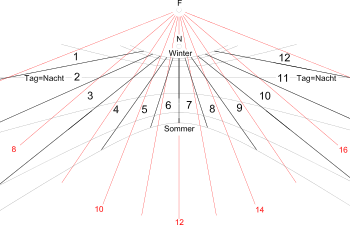 Dial of a wall sundial for the simultaneous display of temporal (twelve hours, black) and equinox (red, digit at the end of the hour) day hours
( both types of hours are of the same length for the same day and night .)

An equinox hour is the twenty-fourth part of the full day consisting of light day and night .

In contrast to the temporal hour, its length does not change with the season , but rather constant. The measurement of the full day with equinox hours of equal length was first used around 2,400 years ago in Babylonia to make astronomical observations comparable regardless of the season. Today's hour is an equinox hour, which is only freed from its seasonal fluctuations and from small errors due to the somewhat uneven rotation of the earth and is realized with modern technical means ( atomic clock , satellite and VLBI astrometry).

With the temporal hour, the light day and the night, the lengths of which change significantly over the course of the year, are divided into 12 hours each. This corresponded to the earlier feeling and custom of not combining night with bright day.

The name equinoxal hours refers to the fact that the temporal hours of the light day and those of the dark night at the equinoxes ( equinoxes ) are of equal length.

Geminos von Rhodes reported on the finding of the Pytheas of Massalia that the duration of the night depends on the geographical location of the respective place. However, it is not apparent from his explanations. whether he meant equinox or equinox. Otto Neugebauer calls this report the oldest evidence of the concept of the hour (¹ra) as a defined measure of time.

The Babylonian calendar did not divide the day into 24 time units, which is why ancient Egyptian influence for this system can be seen as likely. The period of their creation can be as early as the 4th century BC. BC , since Pytheas of Massalia refers to the term G¨j perÐodoj introduced by Eudoxus of Knidos .

The use of the equinox hours is later a well-known metric for Hipparchus of Nicaea . In the appendix to his commentary on Aratos by Soloi and Eudoxos by Knidos, he uses the well-known 24-hour circles and names stars whose rises in certain times of the year are separated from each other by about an equinox.

With the invention of the stroke clock , it was possible for the first time to read equinox hours mechanically without having to perform astronomical calculations. A mechanical watch with a display of the previously common temporal hours would be very expensive, but its construction has been tried in isolated cases. Equinox hours in connection with striking clocks are first recorded in Padua in 1344 . Genoa followed in 1353, Bologna in 1356. As a result, strike clocks came into use all over Europe .