The Bund is a Swiss daily newspaper from the federal city of Bern . Founded on October 1, 1850, the federal government advocated the Swiss federal constitution, which came into force in 1848, and saw itself as the mouthpiece of the new federal state.

The newspaper has a WEMF - certified circulation of 34'264 (previous year 37'362.) Sold or 35'944 (previous year 37'800.) Distributed copies. The three regional editions of the Berner Zeitung and the head leaves the Bernese Oberland and Thuner Tagblatt from the same publisher achieve together with the federal government a range of 324'000 (prev. 325,000) readers (WEMF Total Audience 2018-2).

Editor in chief since January 1, 2015 Patrick Feuz, editor of the editorial coat since 2018 Arthur Rutishauser , managing editor is Beat Stähli.

The federal government is divided into four fascicles that represent the classic newspaper departments :

On Saturdays, the “Saturday interview” and the weekly leading article appear in place of the topic page; The magazine is enclosed with the Bund on the same day 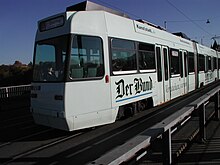 A tram from Bernmobil as a federal advertising medium

The federal government is published by Espace Media AG , which has been part of the Zurich Tamedia group since 2007 . This, also the publisher of the Berner Zeitung , is responsible for the publishing business: since the introduction of the so-called Berner Modell - one publisher, two newspapers - since January 1, 2004, advertisers can only book ads for both titles together.

Since the cooperation in terms of content, the layout of the federal government has been based on that of the Tages-Anzeiger . The Publico font family is used in both of them, which should facilitate the exchange of content between the two newspapers. The layouts of the Bund and Tages-Anzeiger were designed with the aim of ensuring that they are "as similar as necessary and as different as possible". The dominant colors in the Bund layout are black and blue.

The Bund was founded by the Solothurn bookseller Louis Jent and appeared for the first time on October 1, 1850 with an edition of around 1,000 copies. At first the newspaper had two editors. It was initially founded as an independent newspaper modeled on The Times , but soon sided with the Liberals .

At first the Bund appeared daily, including Sundays. Between 1890 and 1967 it was published twice a day on weekdays after an attempt to do this failed in 1869 due to resistance from the readership.

In the German Reich , the Bund was banned from 1934 to 1945, as was the Neue Zürcher Zeitung and the National-Zeitung . The ban was issued in response to reports on the so-called Röhm Putsch .

In the 1990s, the NZZ Group took over the federal government . However, it did not succeed in leading the newspaper into profitability. Finally, in 2004, Espace Media took over 40% of the shares and operational management of NZZ, and in 2007 also the rest of the NZZ stake. From March 2005 the Bund was printed in the Espace Media printing center. However, he remained editorially independent of the Berner Zeitung .

In May 2006, as a result of austerity measures , the federal government dissolved its sports department. Afterwards, the sports department of the local competitor Berner Zeitung , which had been expanded with federal journalists, took over the reporting. Starting in 2008, a project group from Tamedia AG, which has been the majority shareholder of Espace Media since 2007, examined various options for the federal government . The focus was either on a close collaboration with the Tages-Anzeiger or the merger with the Berner Zeitung to create a new regional newspaper .

The announcement triggered numerous, mostly regretful or indignant reactions. As a result, the Bernese political advisor and author Mark Balsiger launched the “Save the Bund” committee. The committee, which is chaired by politicians from various parties and personalities from business, science and culture, advocates the independence of the federal government . During the first two weeks of its inception, the Petitions Committee was joined by approximately 7,000 people; At the beginning of 2010 the committee had 16,500 members.

In May 2009, the Tamedia AG board of directors decided on the variant that Bund editor-in-chief Artur K. Vogel and Res Strehle , co-editor-in-chief of the Tages-Anzeiger , had worked out: The Bund will be retained as an independent title, but will work closely in terms of editorial content together with the Tages-Anzeiger . The model has been in force since October 2009: the federal government receives all of its international reporting, parts of domestic politics, the economy, sport and culture, as well as supplements from the Tages-Anzeiger . A joint Bundeshaus editorial team in Bern under Bund- Ägide, headed by Fabian Renz, reports on federal politics for both titles.