Stephan Born (original name Simon Buttermilch ; * December 18, 1824 in Lissa , Province of Posen ; † May 4, 1898 in Basel , Switzerland ) was an early socialist politician in the area of ​​the German Confederation . As the founder of the General German Workers ' Brotherhood, he created the first supraregional trade union organization of the German workers' movement . After participating in the revolution of 1848/49 , which ultimately failed , he lived in exile in Switzerland and took on citizenship there. In 1860 he became an honorary professor in Basel. 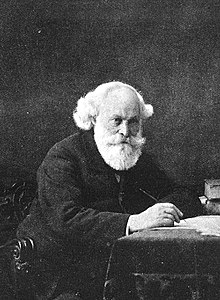 He also worked as a translator from French, namely from Alphonse Daudet and François-René de Chateaubriand .

Born was Simon Buttermilch, the son of a realtor. Although he successfully attended high school, university studies failed due to a lack of financial means in the family. He originally belonged to the Jewish religious community . After his conversion to Protestantism , he had his name changed to Stephan Born. In Berlin he learned the printing trade in a publishing house that also published scientific papers, and this motivated Born to do self-taught studies, including attending university lectures as a guest auditor. He became a member of the "Berliner Handwerkerverein" and was active in the developing labor movement. Born wrote mainly political pamphlets, but also theater reviews and a story.

In 1846 he went on a wandering abroad, came into contact with Robert Blum in 1847 and met Friedrich Engels in Paris . A little later he came into contact with Karl Marx in Brussels , where Born worked as a typesetter for the Deutsche-Brusser-Zeitung . In the following years Born was active for the " League of Communists ", which was largely shaped by Marx and Engels. What impressed him most about her position was the "scientific ground on which she started."

When he got the news of the March Revolution in Prussia and other states of the German Confederation , which was historically motivated by a liberal and national state , Born returned to Berlin. There he was instrumental in founding the "Central Committee of Workers". He became its president and editor of his journalistic organ Das Volk . As chairman of the Berlin “Association of Berlin Book Printers Journeyman”, he led two strikes in late April and early August with varying degrees of success.

Some time later he was instrumental in the preparation and implementation of the first general workers' congress. After the congress had decided to found the " General German Workers' Association ", it was above all Born's organizational talent that made the movement so successful. After the victory of the counter-revolution in Prussia , Leipzig became the seat of the organization. There Born was editor-in-chief of the association's journal The Fraternization . During this time, Born moved away from the theoreticians Marx and Engels in terms of content in view of active political freedom. “All of a sudden, all communist thoughts were wiped away for me, they had absolutely no connection with what the present demanded. […] What did I care about distant centuries, when every hour offered only urgent tasks and work in abundance! "

In the last phase of the revolution, Born participated in the so-called imperial constitution campaign in part in the barricade struggle, for example during the May uprising in Dresden , and later also in Baden and Bohemia in the resistance of the radical democrats against the forces of reaction that led to the March Revolution until July 1849 finally reflected. After the end of the revolution, he emigrated to Switzerland and later became a Swiss citizen.

First he worked as a teacher in Küsnacht in the canton of Zurich . In 1860 he became a professor at the grammar school and academy of Neuchâtel for about twenty years . Later he was editor of the Basler Nachrichten and taught German and French literature as an honorary professor at the University of Basel . He also dedicated himself to the work of Heinrich Heine and was editor of the memoirs of Jodocus Donatus Hubertus Temme Stephan Born was the brother of David Born and is related to Max Born . He found his final resting place in the Wolfgottesacker cemetery in Basel.

Born as author or editor: