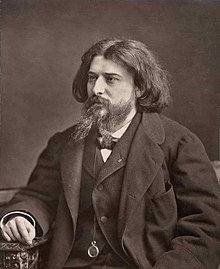 The mill at Fontvieille [1] , known as "Le Moulin d'Alphonse Daudet", which Daudet did not own and in which he never lived. Below the mill is the basement ("sous-sol") with the entrance to a small museum.

Alphonse Daudet (born May 13, 1840 in Nîmes , Département Gard ; † December 16, 1897 in Paris ) was a French writer who first worked as a poet and then as a dramatist and above all a narrator. Almost all of his oeuvre was successful during his lifetime and is still a fixture in French literary history. His best-known works are the humorous novel Tartarin de Tarascon ( Tartarin von Tarascon ), the anthology Lettres de mon moulin (German letters from my mill ) and the autobiographical novel Le Petit Chose: Histoire d'un enfant (German Der kleine Dingsda: Story of a child ). He was the brother of Ernest Daudet and the father of Léon Daudet , Lucien Daudet (1878-1946) and Edmée Daudet (1886-1937).

Childhood and youth in Provence

Alphonse Daudet was the third and last child of the silk goods manufacturer and dealer Vincent Daudet and his wife Marie Adelaide, née Reynaud. As is not uncommon in well-off families, he spent his early childhood with a wet nurse in a village. At the age of nine he left his native Nîmes with his family and moved to Lyon , where his father tried a fresh start after his company went bankrupt, perhaps in the wake of the February Revolution in 1848. In Lyon, Daudet attended the Collège-lycée Ampère until in 1856 the family's financial situation forced him to leave school without attending the two final classes ("philosophy") and thus without "bac" (high school diploma).

At 16 he lost his eldest brother. Overall, his childhood was not very happy.

After leaving the Lycée, Daudet was from May to October 1857 auxiliary teacher ("Maître d'études" or "pion") at the Collège d ' Alès . He later processed the traumatic experiences of this time in his first novel Le Petit Chose (German: The Little Thing).

At the end of 1857 he was in Paris with his brother Ernest, who was three years older than him, who had already tried his hand at journalism there and who later (1882) described the story of their time together in his memoirs Mon frère et moi ( My brother and I ). Daudet joined the Parisian bohemian and evidently soon became infected with syphilis, which would bother him all his life.

Daudet had arrived in Paris with a small volume of poems which he published in 1858 under the title Les Amoureuses and which were well received. In 1859 he became a freelancer for the newspaper Le Figaro , where he was gradually able to earn a place in the literary scene with poems and chronicles.

Also in 1859 he met the well-known Occitan author Frédéric Mistral , whom he admired, but without attempting to write Occitan himself.

In 1860 he got a job as a little-used private secretary to the Duke of Morny , a half-brother of Napoleon III. and influential politician. Morny supported him until his death in 1865 and thus supported him in his career as a writer.

Shortly after he had written a first play with a partner, La dernière idole (The Last Idol), Daudet went on a three-month trip through Algeria in the company of an older cousin in the winter of 1861/62. Here he hoped to fix his health problems. The aim of a full recovery was naturally not achieved, but Daudet collected a lot of material for later works, especially the Tartarin . In his absence, his play was successfully performed in Paris.

A year later followed a stay of several months in Corsica ( Îles Sanguinaires ) , also for health reasons . This also provided him with material and subjects for later works. Repeated visits to his home in the south of France provided him with ideas and suggestions, especially for the mostly short stories and sketches that appeared in magazines from 1866 and collected in 1869 as Lettres de mon moulin (English letters from my mill , 1879). Contrary to the title, the anthology contains practically no letters, but rather individual stories, but is based on the general fiction that the texts were written in an old, abandoned Provencal mill acquired by Alphonse Daudet and sent to Paris.

In 1867 Daudet married Julia Allard (1844–1940). The marriage was happy. His wife was a literary writer herself and is known for her Impressions de nature et d'art (1879), L'Enfance d'une Parisienne (1883) and some literary studies that she published under the pseudonym Karl Steen.

From the end of 1867 in the feature section of a magazine and in 1868 in book form, Le Petit-Chose (Eng. Der kleine Dingsda , 1877) appeared, in which Daudet dealt with his not easy early years. In 1872 the novel Aventures prodigieuses de Tartarin de Tarascon) (Eng. The wonderful adventures of Tartarin de Tarascon) and the three-act play L'Arlésienne , an adaptation of his story of the same name, for which Georges Bizet wrote the stage music. But first the novel Fromont jeune et Risler aîné (1874) brought the great success and was awarded by the Académie française . He continued this success with Jack (1876), the story of an illegitimate child who falls victim to his mother's selfishness. From then on he concentrated on novels and successfully published works such as Le Nabab (The Nabob) (1878), Les Rois en exil (1879), Numa Roumestan (1881), L'Evangéliste (1883) and Sappho , a Parisian moral picture (1884). Trente ans de Paris, à travers ma Vie et mes Livres (1887) contains the genesis of his books, and he expanded his memories in Souvenirs d'un homme de lettres (1888). L'Immortel (1888) is a satirical Attac ke against the Académie française, which Daudet never accepted. From 1889 Daudet wrote again for the theater. In addition, other stories were created, such as La Belle Nivernaise and the Tartarin sequels Tartarin sur les Alpes (1885) and Port-Tarascon . Dernières Aventures de l'illustre Tartarin (1890).

In 1886 Daudet lent money to Édouard Drumont , the founder of the French Anti-Semitic League, so that he could complete his two-volume anti-Jewish pamphlet La France juive . 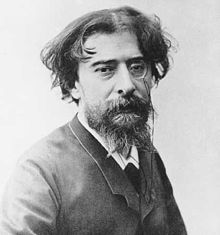 In 1884 the first signs of spinal cord disease appeared. Daudet increasingly suffered from tabes dorsalis , the late effects of his syphilis infection. The last years of his life were strongly marked by the disease progressing to complete paralysis . It was during this time that he wrote his most poignant work, which was only published in 1930 under the Provencal title La Doulou (= la douleur, pronunciation [dulu]) (Eng. In the land of pain ). In this collection of notes, Daudet examines his illness and the associated changes in his person and environment with a relentless look. "In my [...] skeleton the pain echoes like the voice in an apartment without furniture or curtains." Already dependent on a wheelchair, he supported young writers and wrote a few more works. Daudet died on December 16, 1897 during the Dreyfus affair , in which he stood against Alfred Dreyfus despite his friendship with Émile Zola .

The novels established Daudet's fame. His fame today is based primarily on his early works, the letters from my mill and above all the Tartarin of Tarascon . Daudet confessed that he invented little, he wrote everything from nature.

His experiences, his milieu, the men he was acquainted with, people who played more or less important roles in Parisian life, were all incorporated into his art. The friendship with Frédéric Mistral was of great importance for his development, and with it his turn to topics and fabrics from his Provencal homeland. Daudet was also a close friend of Edmond de Goncourt (who died in his house), Gustave Flaubert and Émile Zola , who called him un charmeur . His style is considered realistic-impressionistic, but his work defies any school-like classification in the artistic currents of his time, whether naturalism , realism or impressionism . He also protested against accusations of imitating Dickens (whom he held in high regard). "Daudet was an individualist and so asserted himself to the end."