The violinist in Gmünd 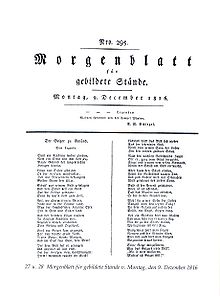 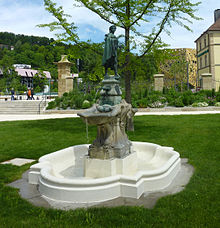 Violinist in Gmünd at the Herrgottsruhkapelle near St. Leonhard in Schwäbisch Gmünd

The Geiger zu Gmünd is a ballad by Justinus Kerner .

The Biedermeier poet Justinus Kerner (1786–1862), who had been a senior doctor in Gaildorf since 1815 , discovered in 1815 or 1816 a depiction of the holy sorrow with an accompanying legend in the little Andreaskirche in Schlechtbach near Gschwend . When his poet friend Ludwig Uhland visited Kerner in Gaildorf in September 1816, the "Geiger" was conceived on September 3, 1816 as the two friends exchanged ideas on a walk. The goldsmith appearing in the caring legend and the Schwäbisch Gmünder's well-known sense of merrymaking (keyword "Gaudia mundi") moved Kerner to relocate the story to the nearby town on the Rems , to a fictional, never-existing chapel of St. Cecilia , the patroness the music. Upon repeated reminders from Uhland, Kerner edited the ballad ready for printing in October 1816; through the mediation of his friend, it was able to appear in Cotta's “ Morgenblatt für educated Estates ” in Stuttgart on December 9, 1816.

The figure of the poor violinist, who through his music touches the image of St. Cecilia in a Gmünder chapel so much that it throws him his golden shoe and who is suspected of being a church thief when he shows the gift and is immediately sentenced to death, until the renewed intervention by the saint, who also gives him her second shoe, proves his innocence - this figure undoubtedly arouses the longing for a better world in which instead of envy and hate there is happiness and harmony.

Since the end of the 19th century the violinist has become a symbol of the city of Schwäbisch Gmünd . Not only the Geiger fountain in the city ​​garden reminds of the poem.

An opera fragment (text by Karl Heyl) with the title Der Geiger von Schwäbisch Gmünd. Opera in one act based on a medieval legend is in the Worms City Archives. It is contained in Manfred Heyl's estate .