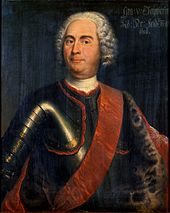 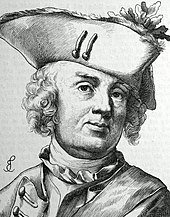 Born in Pomerania , he first entered the regiment of his uncle, Lieutenant General Dettlof von Schwerin , as an ensign , and the company of his brother, Lieutenant Colonel Bernd Detlof von Schwerin . This regiment was transferred to the Netherlands in 1701 at the beginning of the War of the Spanish Succession . He served in the battles of Schellenberg and Höchstädt . In 1703 he was promoted to lieutenant, in 1705 to captain and chief of a company and in 1707 to lieutenant colonel in the army of Duke Friedrich Wilhelm von Mecklenburg-Schwerin . He had combat missions in the battles of Ramillies , Malplaquet and, with the Swedish commander Magnus Stenbock , near Gadebusch . In 1708 he was promoted to colonel . In 1711 he was sent on a secret mission to King Karl XII. from Sweden to Bender , where he stayed for a year.

In 1713 he got together with King Karl XII. in captivity in Bender. On September 3, 1718, he was promoted to major general by Duke Friedrich Wilhelm von Mecklenburg-Schwerin. He faced the invasion of the Hanoverian Army in the Great Northern War on March 6, 1719 near Walsmühlen in Mecklenburg in a brilliant battle. After the battle, the Duke promoted him to lieutenant general on March 8th.

After part of Schwerin's property had fallen to Prussia, he entered the service of the Prussian King Friedrich Wilhelm I in 1720. He was his envoy in 1721 in the Electorate of Saxony and in 1722 in the Kingdom of Poland . In 1722 or 1723 he became the owner of the Schwendy foot regiment (1806: No. 24), which later belonged to the elite of the Prussian army . Schwerin was an educated and humane gentleman and, as a commander, was a conscious counterpart to the old Dessauer and his relentless drill.

In 1724, Count von Schwerin tried in vain to prevent the Thorner blood court against Protestants on behalf of Prussia . In 1730, as major general , he was a member of the court martial that had to judge Hans Hermann von Katte and the Crown Prince because of their attempted escape. In the same year he became governor of Peitz . The cheerful officer, devoted to the arts and sciences, was an exception in the army of the soldier king, but the latter promoted him to lieutenant general in 1731 and gave him his special confidence in advising on all military matters.

Colored lithograph of Schwerinsburg Palace (from Alexander Duncker's The rural residences, castles and residences of knightly landowners in the Prussian monarchy , 1857–1883)

From 1720 to 1733 he had a mansion-like mansion built in Cummerow near Ducherow . King Friedrich Wilhelm I had the place renamed Schwerinsburg after a visit to the manor house in 1733 ; the mansion was now called Schwerinsburg Castle .

In 1733 Schwerin was used as the commanding general to enforce the execution of the Reich in Mecklenburg. On March 8, 1736 he was awarded the Black Eagle Order . In 1739 he was promoted to general of the infantry . Frederick II appointed him General Field Marshal on June 30, 1740 and one month later elevated him to the rank of count . In the First Silesian War he won the Battle of Mollwitz on April 10, 1741 , after Friedrich II had left the battlefield on his advice. 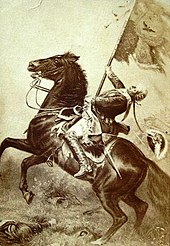 After this war he was the fortress commander of Brieg and Neisse . In the Second Silesian War he commanded the army coming from Glatz and played a major role in the victory and capture of Prague on September 16, 1744.

Schwerin died in the Battle of Prague at the beginning of the Seven Years' War . He led the first left wing attack on the Austrians on Homole Mountain . When his own regiment was pushed back by heavy enemy musket and artillery fire and got into disarray, Schwerin blew up and snatched the flag of the 2nd Battalion from the hand of Staff Captain von Rohr in order to bring his regiment to the shouting “Come on, my children to pull it forward again. Fatally injured by several bullets, he fell from his horse. 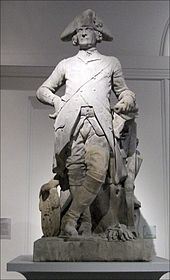 Bettkober monument in the hall of the DHM 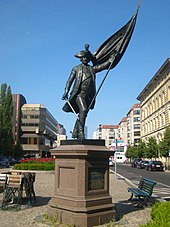 Monument on Zietenplatz in Berlin-Mitte