Karl Christian Erdmann was the only son of Duke Christian Ulrich II of Württemberg-Wilhelminenort (1691–1734) from his marriage to Philippine Charlotte (1691–1758), daughter of Count Erdmann von Redern auf Krappitz. Through the marriage of Duke Sylvius I Nimrod to the heiress Elisabeth Marie from the Podiebrad dynasty , the Württemberg residents came to the Silesian Duchy of Oels . Sylvius Nimrod's sons had divided the country into lines of Oels, Bernstadt and Juliusburg . Karl Christian Erdmann was a grandson of the founder of the Bernstadt line, Christian Ulrich I.

The prince was trained in Oels, Stuttgart and at the University of Tübingen . At first he was in imperial military service in the campaign against France, but switched to the Danish army at the request of his mother and to avoid a change of religion. In 1736 he became Danish major general of the cavalry. Karl Christian Erdmann was in high favor with the Danish king and in 1739 became commander of the royal bodyguard. He wore the Danish Elephant Order and the Ordre de l'union parfaite . After the death of Christian VI. from Denmark he returned to Oels in 1747; Appointed lieutenant general by King Friedrich II of Prussia , he became governor of Breslau and received the Order of the Black Eagle . 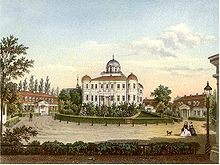 According to legend, Karl Christian Erdmann got lost while hunting in 1745 and fell asleep in the forest. He dreamed of founding a city at this point. Until 1945 a memorial, the so-called Erdmannsstern, testified to this event. Initially a hunting seat, the planned residence town of Carlsruhe was built in 1763, in which the duke also adhered to the architectural concept for the Baden city of Karlsruhe . Here he also built a castle until 1753, in which he resided.