Bierutów [ bʲɛˈrutuf ] ( German Bernstadt an der Weide or Bernstadt in Silesia ) is a city in the Polish Voivodeship of Lower Silesia . It has about 5,000 inhabitants and is the capital of an urban and rural municipality in which more than 10,000 people live.

The city is located in Lower Silesia on the pasture east of Wroclaw , between the cities of Oleśnica ( Oels ) in the northwest and Namysłów ( Namslau ) in the southeast , 14 km away . 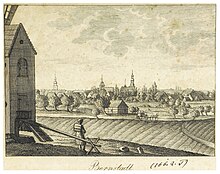 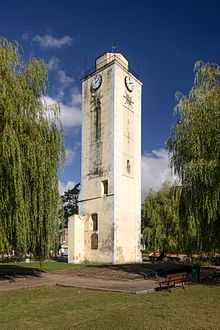 The town was first mentioned in a document in 1266 . Before that, Duke Heinrich III. from Breslau at this point, where the important trade route from Breslau via Kreuzburg to Krakow crossed the pasture and the Slavic village of Ligniza was previously located, the city of Fürstenwald was built according to Neumarkt law . In 1266, Fürstenwald received the mile rights and the soft image rights , which included 20 surrounding villages. The name Fürstenwald was changed to civitas Beroldi as early as 1269 and from this the name Bernstadt developed from the name forms Beroldestat (1288) and Pernstatt (1495) , which was given the addition of an der Weide to distinguish it from places of the same name . The Polish name is a modification of the German. In 1412/13 the area of ​​Bernstadt was spun off from the Duchy of Oels, which as the Duchy of Bernstadt was the residence of several dukes.

Bernstadt received a regular cityscape, the center of which was a square ring. After Breslau , Namslau and Brieg led three provided with gates roads out of town. Around 1323 a castle of the Dukes of Oels was built in the eastern part of the city , the founding of which is attributed to Conrad I. In 1337 the Gothic brick church and the town hall were built. In 1430 the Hussites plundered Bernstadt.

After the Dukes of Oels died out, Bernstadt became part of the Duchy of Münsterberg in 1492 . Between 1511 and 1515, the city of Breslau received Bernstadt as a pledge for an open claim on the Münsterberg dukes. After the death of Duke Charles I in 1536, his sons Joachim , Heinrich II. Johann and Georg II ruled together until 1542. Then Heinrich II received Bernstadt, which he chose as his residence. In 1543 he had the castle converted into a palace and expanded. During his reign, which lasted until his death in 1548, the Reformation was introduced and a princely school was established . At that time, Bernstadt was an economically prosperous city, which, in addition to craftsmen and traders, was mainly shaped by the cloth makers' guild.

Heinrich's son of the same name Heinrich III. sold Bernstadt in 1574 to the von Schindel family and the duchy became extinct. In 1603, a city fire that only six houses survived completely destroyed Bernstadt. Heinrich's brother Charles II bought the destroyed city back from the Schindels in 1604 and rebuilt the duchy. During the Thirty Years War , the city was occupied several times by Imperial, Saxon and Swedish troops.

In 1659 Bernstadt burned down again. The reconstruction took a long time and only in 1680 the town hall and the Katharinenkirche were built again. After the death of Duke Karl von Juliusburg in 1745 the palace was given up as a residence and left to decay. The city, in which 140 houses had brewing rights, also lost its importance as a result. In 1787 Bernstadt had 1963 inhabitants.

In the course of the 19th century, suburbs were laid out and the road construction removed the city gates as obstacles for the traffic through Bernstadt in 1827 and 1887. In 1868 the railway connection from Breslau via Oels to Kreuzburg was inaugurated and Bernstadt received a train station. Despite the rail connection, little industry settled in Bernstadt and the sugar factory built in 1883 was the largest company in town. From 1887 the castle was rebuilt and converted after Bernstadt, as part of the former Duchy of Oels, had become a feudal throne to the Crown Prince of Prussia. At the beginning of the 20th century, Bernstadt had two Protestant churches, a Catholic church, a synagogue , an old castle, a district court and a forestry office.

In 1945 Bernstadt belonged to the district of Oels in the administrative district of Breslau in the Prussian province of Silesia of the German Empire .

During the Lower Silesian operation of the Wehrmacht with the Red Army in Lower Silesia, Bernstadt was half destroyed in January 1945. After the end of the Second World War , the city was placed under Polish administration by the Soviet occupying forces in the summer of 1945 . The Poles introduced the place name Bierutów for Bernstadt . Unless the German residents had fled, most of them were subsequently expelled from Bernstadt by the local Polish administrative authorities .

One or two town festivals are held in the village today in connection with the associated localities. The German language is being taught again today in both the Bernstadt schools and the surrounding educational establishments, which is also well received by the young population.

The city has a train station on the Kalety – Wrocław railway line ( Stahlhammer - Breslau ), with a further stop in Solniki Wielkie ( Groß Zöllnig ), and in the Jemielna district ( Gimmel ) there used to be a station on the Herby – Oleśnica ( Herby – Oels ) railway line .

Remains of the residential palace

Worked in the city

Bierutów has had a partnership with Bernstadt auf dem Eigen in Upper Lusatia since May 10, 1997 .

Towns and municipalities in the Powiat Oleśnicki