from Wikipedia, the free encyclopedia
Battle of Zorndorf
Part of: Seven Years War 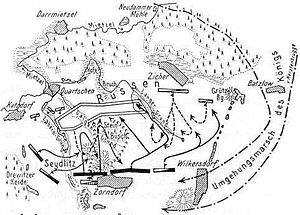 In the battle of Zorndorf on August 25, 1758, a Prussian army under King Friedrich II and the main Russian army under Wilhelm von Fermor met . With his victory, Friedrich prevented the penetration of the Russian armed forces into the Mark Brandenburg , the core province of the Prussian state, in the Seven Years' War .

After Russia had occupied and annexed East Prussia in January 1758 , the main Russian army marched in June with about 50,000 men via Posen to the lower Warta . Opposite it was the 22,000-strong Prussian Corps Dohna , which had withdrawn from Western Pomerania in July . This did result in the Swedes invading the march, but stopped the much more dangerous advance of the Russians. After a failed coup to capture the Küstrin Fortress on August 15, Fermor began firing on it, stopping to the right of the Oder , while Dohna secured the crossing at Frankfurt (Oder) to the left of the river .

After an unsuccessful campaign in Bohemia, Friedrich himself withdrew with his main army of 50,000 men to Landeshut behind the Silesian border at the beginning of August . Given the overall situation , he decided to defeat the Russians before a united Austro-Russian crackdown against his core province.

He left his main army under Margrave Karl von Brandenburg-Schwedt to observe the Imperial ( Austrian ) main army under Leopold Joseph Daun , which was in northern Bohemia, and led 14,000 men in a twelve-day, 300-kilometer forced march to Küstrin. On August 23, Friedrich, after reuniting with Dohna, crossed the Oder at Güstebiese and attacked the Russians encamped near Zorndorf from the north. 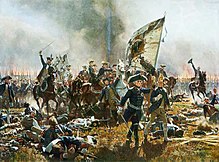 The battle as a historical painting by Emil Hünten (1858)

The battle dragged on throughout the day in scorching summer heat. Contrary to previous experience, the tried and tested Prussian infantry attack could not strike a breach in the opposing front. For a long time the battle raged back and forth, the left Prussian wing backed away, and Field Marshal Moritz von Anhalt-Dessau could not turn the situation around either . The king himself distinguished himself through the commitment of his own life when he dismounted from his horse, took the flag of the Bülow regiment on foot and led his fleeing troops back towards the enemy. Nevertheless, the signs of defeat stood until in the late afternoon General Friedrich Wilhelm von Seydlitz on the left wing brought about the decision by a massed cavalry attack with over fifty squadrons : Contrary to the express and repeatedly repeated order of the king to intervene to relieve the center (“He is liable with his head for the battalion ”), Seydlitz had waited for the moment when he was at the rear of the main Russian power, which had penetrated far into the Prussian lines. Then at the most favorable and extreme moment he gave the order to attack, drove the Russians into the marshes near Quartschen (see map) and thereby turned the battle in favor of Prussia. There was no annihilation of the Russians or their complete expulsion from the battlefield. Friedrich initially expected the battle to continue. Fermor did not leave the field until two days later.

The battle as a historical painting by Wojciech Kossak (1899)

Friedrich honored the tactical masterpiece of his idiosyncratic and ingenious general by introducing him to the allied British envoy Sir Andrew Mitchell, who was present on the battlefield after the Russian withdrawal, with the words: "Without this one we would be bad today."
Fermor reported a victory to Saint Petersburg , for which he received the title of Count from Empress Elisabeth .

The losses were relatively high on both sides, with a total of over 30,000 men wounded, killed or taken prisoner. The Prussians had lost every third man. It was fought with great bitterness. On August 22nd, Friedrich had sent his generals an order "how to behave if I should be shot dead." The result of the Battle of Zorndorf gave Friedrich the opportunity to turn to the battle with the Austrians who were now advancing to Saxony . On September 11th he reunited with Margrave Karl in Lusatia .

Dohna pursued the withdrawing Russians with 17,000 men. Fermor had to break off the siege of Kolberg . Without being able to get supplies from the Baltic Sea, he went back to behind the Vistula , where he took up winter quarters.

Despite the Prussian victory, the battle had more of the effect of a draw, a further confrontation with the Russians was only a matter of time, which also led the war theorist Carl von Clausewitz to a rather divided judgment of the battle.