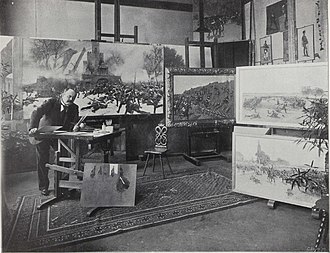 Carl Röchling in his Berlin studio, 1900. Photo by Hermann Boll. 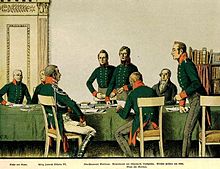 Meeting of the reorganization commission in 1807, lithograph by Carl Röchling

Attack of the Prussian infantry in the Battle of Hohenfriedberg , historical painting by Carl Röchling 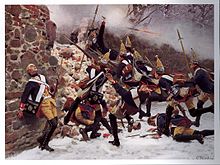 Attack of the Prussian infantry in the Battle of Leuthen in 1757, historical painting by Carl Röchling

Carl Röchling: " The Germans to the Front "

Carl Röchling (born October 18, 1855 in Saarbrücken , † May 6, 1920 in Berlin ) was a German painter and illustrator primarily of military and military-historical subjects. The picture The Germans to the Front from 1900 became an icon of the German Empire as well as of German militarism.

Carl Röchling studied from 1875 to 1880 at the art school in Karlsruhe with Ludwig des Coudres and Ernst Hildebrand and at the academy in Berlin . In Berlin he was a master student of Anton von Werner , on whose behalf he participated in the creation of various panorama paintings.

Later, through his independent work, he became one of the most famous battle and history painters of the late 19th and early 20th centuries. In addition, together with his painter colleague Richard Knötel , he illustrated two children's books that were very popular at the time.

He was one of the preferred selection of contemporary artists that the “Committee for the Procurement and Evaluation of Stollwerck Pictures” suggested to the Cologne chocolate producer Ludwig Stollwerck to commission them with drafts.

Carl Röchling died in Berlin in 1920 at the age of 64. He was buried in the Kaiser Wilhelm Memorial Cemetery in Berlin-Charlottenburg (today's Westend district ). The grave has not been preserved.