Friedrich Leopold Graf von Geßler (born June 24, 1688 in Jodschen, lost place in the district of Gumbinnen , †  August 22, 1762 in Brieg ) was a Prussian field marshal and equestrian general of Frederick the Great .

His ancestors immigrated from Swabia to Western Pomerania around 1618 . He was the son of Konrad Ernst von Geßler and his wife Gertraut von Gattenhofen. His father was colonel of the cavalry and heir to Schwägerau , Insterburg district .

Friedrich Leopold von Geßler joined the Holstein Infantry Regiment in Königsberg in 1703 and became an ensign on June 6, 1703 . He initially fought under Leopold von Dessau in the War of the Spanish Succession . He then served the emperor for about ten years, but returned to the Prussian army in 1713: in 1713 Rittmeister in the Pannwitz regiment on horseback; January 21, 1714 major and transfer to a dragoon regiment ; May 1, 1720 Lieutenant Colonel , August 16, 1726 Commander of the Schulenburg regiment Grenadiers on horseback ; September 21, 1729 Colonel , May 3, 1733 Chief of Cuirassier Regiment No. 4; July 14, 1739 Major General ; May 17, 1742 Lieutenant General .

Geßler distinguished himself particularly in the battles in the first Silesian War , such as the one at Mollwitz and that at Chotusitz . In the battle of Chotusitz on May 17, 1742, Geßler commanded the first meeting of the left wing cavalry under Wilhelm Dietrich von Buddenbrock . After the latter battle he was promoted to lieutenant general and received the Order of the Black Eagle .

Geßler's ride in the Battle of Hohenfriedberg in the Second Silesian War with the Dragoons of the Bayreuth Regiment , during which he captured 67 flags, was long regarded as the most brilliant, daring and most successful attack in the history of the Prussian cavalry. Geßler led the right-wing cavalry in the battle of Kesselsdorf on December 15, 1745. For his services he was raised to the Prussian count status on June 11, 1745 .

On May 26, 1747 Gessler was promoted to general of the cavalry and on December 21, 1751 to field marshal . The last battle he took part in was the one at Lobositz on October 1, 1756. Geßler submitted his farewell in 1757 because of the progressive dwindling of his physical strength, but received it on January 10, 1758.

Friedrich Leopold Graf von Geßler was accepted into the Order of St. John in 1735 after having provided 16 pedigrees . Geßler owned three estates in Silesia; he had sold his previous possessions in East Prussia. He was married to Eleonore Countess von Seeguth-Stanisławsky and had twelve children with her.

Geßler died on the evening of August 22nd, 1762 in Brieg, where he is also buried. The grave monument in the Nikolaikirche, designed by Langhans , was donated in 1790. 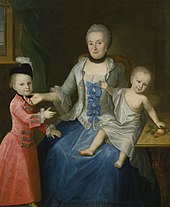 Friederike Adolphine with her two sons