from Wikipedia, the free encyclopedia
This is the spotted version , flagged on November 21, 2018 . There is 1 pending change that has yet to be viewed. 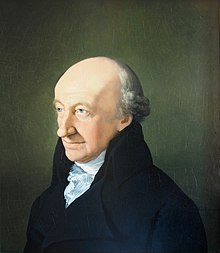 Der Teutsche Merkur was published from 1773 to 1789 by Christoph Martin Wieland as a literary magazine and review organ in Weimar .

The role model was not only for the title of Mercure de France , but with restrictions. Wieland writes:

Incidentally, the German Mercury, neither in terms of the execution, nor in terms of the number and nature of the articles, can and should be modeled entirely on the French. Even the essential differences in the national constitution do not permit this. We have no capital which would be the general academy of the nation's virtuosos and, as it were, the legislature of taste. We do not have a permanent national theater; Our best actors, as well as our best writers, poets, and artists, are scattered through all circles of the German Empire, and for the most part deprived of the advantages of close contact and confidential communication of their insights, judgments, drafts, etc., which are necessary for the perfection of their works would contribute a lot.

Apparently it was Wieland's aim to help offset the aforementioned disadvantages of the German cultural landscape by creating a journalistic link and to promote the formation of literary (national) taste through reviews. Accordingly, he and his staff carried out an extensive critical activity, which for a long time extended to almost everything that was of importance to the literary world.

In addition, numerous poetic works by Wieland were first printed in the magazine. One such publication, the “Letters on Alceste” published in September 1773, gave Goethe and Herder a nuisance and prompted Goethe to write the farce of gods, heroes and Wieland . Wieland reacted to this attack with cheerful mildness.

From 1790 to 1810 Wieland published the journal Der Neue Teutsche Merkur .

As part of the retrospective digitization of academic review organs and literary magazines of the 18th and 19th centuries from the German-speaking area at Bielefeld University Library, the Teutsche Merkur and Neue Teutsche Merkur were made available as digital copies (see web links).