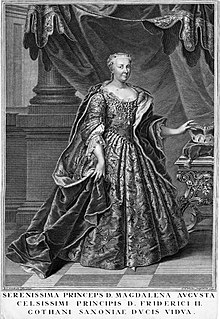 Magdalena Augusta von Anhalt-Zerbst with a portrait of her husband Friedrich II. Von Sachsen-Gotha-Altenburg in her hand

Magdalena Augusta von Anhalt-Zerbst (born October 13, 1679 in Zerbst , † October 11, 1740 in Altenburg ) was Princess of Anhalt-Zerbst from the house of the Ascanians and by marriage Duchess of Saxe-Gotha-Altenburg .

Magdalena Augusta was a daughter of Prince Karl Wilhelm von Anhalt-Zerbst (1652-1718) from his marriage to Sophie (1654-1724), daughter of Duke August von Sachsen-Weißenfels .

On June 17, 1696 she married in Gotha Duke Friedrich II. Of Saxe-Gotha-Altenburg , who had come in 1691 to the government. The letters from the Duchess to her husband kept in the Gotha library bear witness to a loving and happy marriage.

Her refusal to let her youngest daughter teach English after she had been promised to the presumptive British heir to the throne is evidence of a rather humble mind. She claimed: “ [...] that was quite unnecessary, because since the Hanover family had been on the English throne for more than twenty years, the people in England and especially at court had to speak German as often and as well as English. ”

From their marriage, Magdalena Augusta had the following children:

Magdalena Augusta found her final resting place in the princely crypt of the castle church on the Gotha Peace Stone next to her husband, who had died eight years earlier.