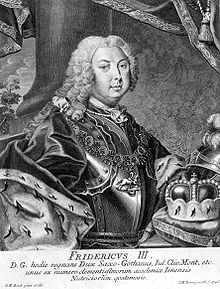 Friedrich was the eldest son of Duke Friedrich II of Saxe-Gotha-Altenburg (1676–1732) from his marriage to Magdalena Augusta (1679–1740), daughter of Prince Karl Wilhelm von Anhalt-Zerbst . The prince was very thoroughly trained and was considered good-natured, if not gifted. From 1718 to 1724 he made his cavalier tour to the Netherlands, France, England and Italy. When Friedrich III. he followed his father in 1732 as Duke of Saxe-Gotha-Altenburg.

From 1734, after the invasion of French troops, he drove a flourishing soldier trade with the Emperor Charles VI. , the Prince of Waldeck and the King of Prussia , which enabled him to issue a tax in his own country.

The country, especially the Altenburg part, suffered badly in the Seven Years' War and Friedrich III. involved the country itself in a war with its neighbor, Duke Anton Ulrich von Sachsen-Meiningen ( Wasunger Krieg ). In 1744 Frederick III managed to have the children from Anton Ulrich's first marriage, which was not befitting his status, declared by the emperor as not entitled to succeed, which would have cost him in the case of Saxony-Meiningen . With Anton Ulrich he came into contradiction over the reign for the minor Ernst August von Sachsen-Weimar-Eisenach , the Friedrich III. eventually took over from 1748 to 1755.

With the introduction of the small groschen and half-groschen minted in large quantities in his mint in Gotha , Friedrich hoped for a big profit. The coins minted in huge quantities were not only intended to meet their own needs, but were also intended for profitable export to neighboring countries. Since the neighboring states also minted small coins that were impaired and poured into his duchy, this monetary policy was doomed to failure.

From 1747 Friedrich had the Weimar master builder Gottfried Heinrich Krohne build the Gotha Orangery based on the French model. He issued numerous ordinances relating to church affairs and supported the Moravian Brethren in Neudietendorf , which was founded there in 1742.

Under Friedrich's government, his country remained the most powerful of the small Thuringian states and his court developed into a center of the Enlightenment . The latter is mainly due to his ingenious, spiritually superior wife.

Friedrich III. was not laid to rest like his father and grandfather in the royal crypt at Friedenstein Castle , but in the town church of St. Margarethen on Neumarkt, in whose crypt his great-grandfather Duke Ernst I ("Ernst the Pious") is buried. He succeeded his wife Luise Dorothea, who had died five years earlier, and who in her will the Margaret Church, "... at the feet of Duke Ernst and his wife ...", had designated as her last resting place.

Duke Friedrich III. was one of the godparents of the British King George III. who was his nephew. He was the son of Friedrich's sister Augusta , Princess of Wales since their marriage in 1736 .

The person of Frederick III. is the main character of the two-day baroque festival at Friedenstein Castle, which has been taking place in the former royal seat of Gotha since 2001 . On the last weekend in August, over 150 performers invite you on a journey back in time to the 18th century and relive the glamorous late baroque era in the historical ambience of the palace and the orangery : Friedrich III. (from 2001 to 2008 portrayed by opera singer Günter Köbrich, since 2009 by Uwe Müller) and his wife Luise Dorothea (portrayed by Annett Jahn since 2009) complete tours of the craft market, grant privileges, hold guard parades, give audiences , and go on trips to the City and stroll through the orangery garden.

They had the following children together: