He came from the Pomeranian noble family von Schöning and was the son of Hans Adam von Schöning († 1665) and his wife Marianne von Schapelow († 1664).

After his studies in Wittenberg and Strasbourg from 1657 to 1660, joined Schoening, after he had spent traveling in Western and Southern Europe five years in 1665 as Counselor and then as an officer in the service of the Great Elector of Brandenburg. He distinguished himself in the war against Sweden 1675-79, especially in the conquest of Stettin , Rügen and Stralsund as well as in the hunt over the Curonian Lagoon , from where he chased the Swedes after the battle near Telschi to Riga , so that he did 1677 Major General, 1684 Lieutenant General, Governor of Berlin and Colonel of the Life Guard . In 1685 he was appointed to the Real Secret Council of State and War. His early retreat while hunting across the Curonian Lagoon on February 12, 1679 sparked controversy in the Prussian officer corps, but had no consequences due to his other achievements. Until the 18th century, however, the derision of the Schönsen maneuver persisted in the Prussian officer corps.

He commanded the 8,000 auxiliary troops that the elector sent to aid the emperor against the Turks , and in 1686 helped storm Ofen (now Budapest ). He brought with him two captured Ottoman women from the campaigns against the Turks, which he gave as gifts to Prussian nobles.

From 1688–89, at the beginning of the War of the Palatinate Succession , he led the Brandenburg troops against the French on the Lower Rhine as Lieutenant Field Marshal . On March 12, 1689, he was victorious in the battle of Uerdingen . In the camp before Bonn in September 1689 as a result of a dispute with General von Barfus relieved of his command, he was released from military service Brandenburg 1690th Thereupon he entered the Electoral Saxon service and was in 1691 by Elector Johann Georg III. appointed Field Marshal General and Real Secret War Council. In 1692 he was arrested during a spa stay in Teplitz on the orders of the emperor and brought to the Spielberg because he was accused of treasonous negotiations with the French and was only released again in 1694. As a result of the imprisonment for a fortress, his health was so weakened that he was only able to function as head of the aristocratic cadet corps in Dresden for a short time , where he died at the age of 55. 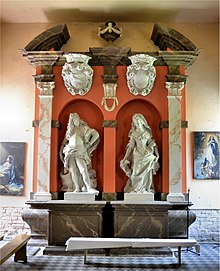 He found his final resting place in the village church of Tamsel , where a double epitaph with his wife, the work of the Saxon sculptor George Heermann , was erected in his honor . Just like the magnificent tomb for his third son and heir, Johann Ludwig, it has withstood the ages and is one of the sights of the place today.

In the “Turkish War Quarter” in Berlin-Wedding , Schöningstrasse was named after him.

“Soon after his return his father died (1665) and Hans Adam became the owner of Tamsel at barely twenty-four years old. At about the same time he entered the electoral service, married a Fraulein von Pöllnitz in 1670, advanced quickly, became captain, colonel, governor of Spandau and was major general at barely thirty-six. "

- Theodor Fontane : Hikes through the Mark Brandenburg - The Oderland: "Tamsel"

Hans Adam von Schöning had been married to Johanna Margarethe Luise von Pöllnitz (1641–1698) since 1668 , the only daughter of the Brandenburg Major General, Chamberlain and Governor of Lippstadt , Johann Ernst von Pöllnitz . Five of her twelve children died in early childhood. Reached adulthood:

Field Marshals General in the Electorate and Kingdom of Saxony