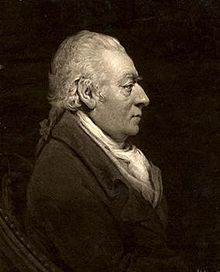 James Wyatt PRA (born August 3, 1746 in Burton Constable , † September 4, 1813 in Marlborough ) was an English architect . In the last third of the 18th century he was one of the most important architects in England. At the beginning of his career he designed in the style of neo-Palladian classicism . Later he turned increasingly to the neo-Gothic . In addition, his work shows influences from the Gothic Revival . Critics dubbed him Wyatt the Destroyer , pointing to his numerous ruthless restorations and additions to Gothic cathedrals , e.g. B. Salisbury , Durham and Hereford .

James Wyatt was the son of a timber merchant and building contractor. 1762–1768 he spent six years in Italy, v. a. in Venice. During this time he became familiar with neo-Palladian architecture.

Upon his return to London , he became famous for building the Pantheon on Regent Street . The design was based on the Hagia Sophia in Constantinople and translated it into a classical language of form. His fame brought him success, he was showered with assignments. For the great Handel memorial service in 1784, he designed and built a royal box in the Pantheon - still in the style of neo-Palladian classicism. On February 15, 1785 he was elected to the Royal Academy of Arts , of which he was president from 1805 to 1806. In 1796 he became the chief architect of the building authority, succeeding William Chambers .

List of Presidents of the Royal Academy of Arts (PRA)