This article deals with the French politician; for the armored cruiser of the same name, see Léon Gambetta (1901) . 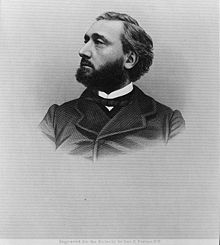 Gambetta was the son of a Genoese merchant who immigrated to France and a Gascognischen mother. At the age of 15, Gambetta lost his right eye while watching a cutler and being hit by a broken drill bit. Gambetta took French citizenship in 1859 . From 1857 to 1860 he studied law in Paris, received the 'License en droit en France' and became a lawyer. When he defended the journalist Charles Delescluze in a court case in 1868 , he became known as an opponent of the Second Empire . In 1869 he was accepted into the Freemasons ' League in the La Réforme Lodge in Marseille .

In 1869 he won a seat in the National Assembly . During the election campaign, he helped formulate the “Belleville Program”, which, with its far-reaching demands for freedoms, became the fundamental manifesto of the radical left. In parliament, Gambetta joined the republican minority who opposed the Franco-Prussian War of 1870.

Gambetta set off from besieged Paris in a balloon in 1870, which this painting by Jules Didier and Jacques Guiaud represents

With Jules Favre , Léon Gambetta called on September 4, 1870, after the defeat at Sedan and the abdication of Napoleon III. , formed the “ Third Republic ” in Paris and became its first interior minister . On October 7, 1870, he was appointed by the Government of National Defense to direct the war in the province. Gambetta then left besieged Paris in a balloon, but his plan to liberate the capital failed. In Tours he organized a new government which was to meet in Bordeaux .

When Paris surrendered on January 28, 1871, Gambetta advocated continuing the war. Adolphe Thiers therefore called him fou furieux (angry madman). Eventually Gambetta had to accept the armistice and resigned from his government office on February 6, 1871. After the war, Gambetta was a firm advocate of revanchism towards Germany and coined the phrase: "Toujours y penser, jamais en parler." ("Always remember, never talk about it!")

In the National Assembly he represented the Bas-Rhin department in Alsace from February 8 to March 1, 1871 ; after the annexation by the Germans, he gave back his mandate in protest. He retired to Spain and Switzerland for a few months and was elected on July 2, 1871, as a member of the Seine department . In the largely monarchist-minded parliament he was the most important representative of the small republican opposition, the party of the "radicals". Increasingly, he represented more moderate positions, which he contributed to the passing of the constitutional laws of 1875 and 1877/1878 to overthrow President Mac-Mahon .

From 1879 to 1881 he was President of the Chamber and from November 14, 1881 to January 27, 1882 President of the Council of Ministers (Prime Minister) . Practically at the same time he also served as foreign minister . His government, which had to rely on the far left and right, was overthrown because of Gambetta's attempt to introduce a list voting system.

The heart of Gambetta in the Panthéon

He was injured in the hand - according to official reports while he was repairing his pistol , possibly by his lover, Léonie Léon - and died of blood poisoning a few days later at the age of 44.

On November 11, 1920, Gambetta's heart was transferred to the Panthéon , the same day that the tomb of the unknown soldier was erected under the triumphal arch .