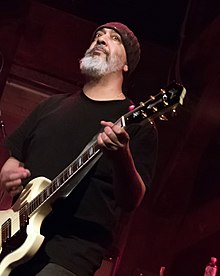 Kim Thayil in the Hamburg factory (2018)

Kim Thayil (born September 4, 1960 in Seattle ) is an American musician.

He is the co-founder and guitarist of the grunge band Soundgarden . After this disbanded in 1997, he worked on various projects, including Probot , a side project of the former Nirvana drummer Dave Grohl . Thayil is of Indian descent. In the Rolling Stone list of the 100 best guitarists published in 2003, he is ranked 100th. Soundgarden reunited in 2010.