An Australian aircraft was hijacked on September 4th, 1975

When an Australian plane was hijacked on September 4, 1975 , East Timorese forced the crew of a Royal Australian Air Force (RAAF) to fly it from Timor to Australia .

On August 11, 1975, the União Democrática Timorense (UDT) tried to take power in the colony of Portuguese Timor with a coup in the colonial capital of Dili . In this way, she wanted to prevent rule from falling to the left-wing FRETILIN in the upcoming independence . A three-week civil war broke out between the two parties, while the Portuguese colonial government withdrew to the offshore island of Atauro . At the beginning of September the victory of FRETILIN became apparent, while UDT fighters made their way to the Indonesian West Timor discontinue. Others fled to Australia across the sea. Baucau , the second largest city in the colony, was a UDT stronghold. Accordingly, there was great fear of the advancing FRETILIN fighters. Murders had already occurred in other parts of the country.

Despite concerns Australia's prime minister sent Gough Whitlam , the Caribou the RAAF with the license plate A4-140 to a presence of the International Red Cross building. The crew on board were the pilot Gordon Browne, Flying Officer Kierman French and loadmaster Bill Crouch. Since the machine flew under the symbol of the Red Cross, the crew members were not allowed to carry weapons. The plane flew back and forth several times between the Australian Darwin and Dili, Baucau and Atauro.

On September 4, at 2 p.m., the plane landed at Baucau Airport to pick up three nuns and take them to Darwin. Also on board were the squadron leader and intelligence officer Stan Harding and André Pasquier, the Swiss head of the Red Cross Operation Timor. UDT fighters from the surrounding areas were camped at the airport. A white flag was waving at the control tower . A crowd of fighters and civilians were gathered on the tarmac. There was also another plane at the airport that Australians Michael Darby, John Whitehall and Bill Bancroft had chartered for the Australian Society for Intercountry Aid-Timor. Whitehall and other volunteer doctors from the aid organization had treated the wounded in Dili. They wanted to fly a Timorese girl with a hole in her heart to Australia that day. The girl was not at the airport that day (newspapers reported that Darby flown out a few weeks later). Instead, UDT fighters came and told the Australians that they wanted to surrender. Darby later stated that he naively believed he could end the civil war if he fled the UDT leadership. Therefore he accepted the "surrender". A white sheet was organized from the Pousada de Baucau to hoist over the control tower. Darby alleged that, with the help of Timorese airport officials, he radioed Australian officials to request a plane to evacuate people. The answer was polite, but not an assurance.

The RAAF crew was not informed of this and was not delighted with Darby and Whitehall's request. They had strict orders not to take any unauthorized passengers on board. Pasquier stated that the fighters could not surrender without their leadership's permission. The surrender to Australian civilians is therefore not official. But the crowd gathered around the plane and pressed for permission to board. Threats were made against the Australians. But the tallest Portuguese policeman Antonio Maria Deus Gil, feared by the locals as “polícia Gil”, appeared most threatening. Gil was hysterical and had taken up arms twice and was only held back by one Timorese. Then Gil went to a pile of weapons for the third time, took a rifle and pulled a hand grenade from his pocket, in which he probably had more. With his finger on the trigger, he went to the Australians and shouted "Eu mato esse cabrão!" (I'm going to kill this bastard). He screamed and gestured wildly. Then Gil sat on the tailgate of the plane and said he would not get up unless the refugees were taken.

Browne radioed for instructions from Australia. But even after a request after half an hour there was none. At that moment the airport lights went out. After two hours, Gil lost patience and ordered the Australians to load the machine. Then he sent the Timorese on board. Browne later stated:

"We were reluctantly kidnapped, but we sympathized with her, if I may put it that way."

The Timorese said they would leave the weapons behind. The Australian civilians also went on board. The process was generally orderly. It was the first flight for most of the passengers. Some had to sit on the floor for lack of space. On the two and a half hour flight to Darwin, many vomited badly. The plane was overloaded, the Caribou was supposed to carry no more than 32 passengers, now there were 54 people on board. The Darwin Airport was closed to other flights. Nevertheless, the Caribou had to circle over the airport for a while, even when the fuel ran out. When they finally landed, the displays were already warning that both engines only had fuel for ten minutes. The Australian civilians were separated from the Timorese and interrogated by the police. They excused themselves with memory problems. According to newspaper reports, the government wanted to investigate Darby's role in the capture. He was an official candidate for the Liberal Party of Australia in Sydney . But the investigation did not take place. The Timorese men were initially taken to Fannie Bay prison, the women and children were (according to government documents) in “light detention” at Carpentaria College.

Documents released in the meantime document the considerations of the Australian government. Prime Minister Whitlam wanted the women and children to be treated as "normal evacuees" while the men as "evildoers should feel the fair weight of the law." But the day after the plane landed, Immigration Secretary James McClelland ruled that all men should have a visa should receive. Gil was charged with his role in the capture, but the charges were quickly dropped. Three months later, Indonesia invaded Portuguese Timor (with Australian permission).

The RAAF crew received a case of beer upon arrival. There was no recognition. Government officials accused French of throwing the refugees off the plane after they were disarmed. Back at the RAAF base in Richmond , they just said, “Nice work guys. That didn't happen. "

The refugees and their later life 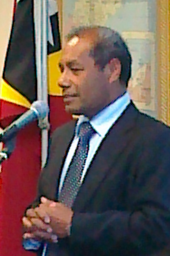 The 44 refugees were 19 men, 11 women and 14 children. Many of them received Australian citizenship. Among them was Abel Guterres , who later became East Timor's ambassador to Australia . The Brandão family of six, with the Helder siblings, Maria and Lúcia, wanted to flee because the father Albino was a local administrator among the Portuguese and had then fought for the UDT. As a light-skinned man with red hair, he stood out. Feliciano da Costa, a teenager, worked at the airport bar. He had helped the UDT at the airport during the civil war. Other refugees were Abilio Henriques (a UDT supporter), José Cruz and the male nurse Duarte Freitas. Costa, Henriques and Cruz later worked on the Melbourne tram . Gil lived in Darwin until his death in 2003.