The title of this article is ambiguous. Further meanings are listed under Baucau (disambiguation) .

Baucau is the capital of the municipality of Baucau in East Timor .

In 1936 Baucau was renamed by the Portuguese, after the dictator of the Estado Novo António de Oliveira Salazar , to Vila Salazar . But the name did not catch on and a few years after the Second World War , the old name was reverted to. 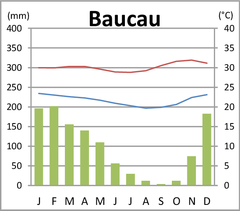 Baucau is located on the north coast of the country, 123 km east of the capital Dili in the administrative office of Baucau . The old town of Baucaus (Vila Antuga) is located in Suco Bahu , in the northwest of the city. The center of the new town (Vila Nova) is in Suco Tirilolo , the south in Suco Buibau and the east in Suco Caibada . The outskirts in the northeast belong to the Suco Buruma . All of these sucos are classified as " urban "

Baucau is characterized by a strong hillside location. From the center of the old town at 336  m above sea level, where the market and cathedral are, you have to follow the road down for half an hour until you reach the beach. While in the upper area, in the Neustadt, there are solid concrete buildings, below the center of the old town there are almost only huts made of wood, clay and straw. Due to the well-tended gardens with many bushes that have colorful flowers and the palm trees and other trees that make the path to the beach almost a forest, this hut town does not appear poor.

Baucau is almost completely dependent on the groundwater for its drinking water supply. There are no year-round water-bearing rivers. Since this is not very deep underground, it is threatened by pollution. 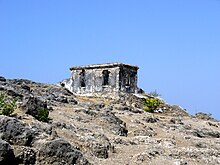 Ruin of a colonial building in Baucau
See also : History of East Timor

Near the city of Baucau, a spout hatchet of the Dong Son culture (around 800 BC to 200 AD) was found in what is now Vietnam .

Baucau was the second place in East Timor where the Portuguese founded a settlement. It developed into the colonial administrative center of the region.

In 1912 an uprising against the Portuguese colonial rulers broke out in Baucau . Marines of the gunboat Pátria under Lieutenant Jaime do Inso had to defend the place against the insurgents between June 29 and July 25. The uprising was quickly put down. 2,000 people are said to have died.

During the UDT's attempted coup in August 1975, she ran two detention centers in the Baucau administrative office. One was in today's Pousada de Baucau in Baucau, the second in Descascadeira , a rice mill in Bahu . Most of the prisoners were kept in the pousada for a few days, where they were interrogated by local UDT leaders. Then they were taken to the Descascadeira. A total of 30 FRETILIN fighters were held captive here. They reported ill-treatment and torture. They were beaten, kicked and beaten with whips. After the victory of FRETILIN, UDT and APODETI followers were now held captive in both places . They also report beatings.

On December 9, 1975, the Indonesians occupied Baucau. Indonesian parachutists followed the bombardment from the air and from the sea. The FALINTIL fighters resisted for several hours before they withdrew into the hinterland. Serious human rights violations such as arrests and torture occurred between 1975 and 1980. There were six detention centers in the city, including the Pousada de Baucau ( Flamboyan Hotel at that time ). In addition, at the end of 1979, East Timorese forcibly resettled were interned in the old town.

On May 29, 1997, elections were held in which representatives of East Timor should be elected to the Indonesian parliament. Several attacks on the Indonesian occupying power and its supporters took place in the surrounding area. On May 28, the former head of the district parliament, Miguel Baptismo da Silva (1987-1992), and his wife were murdered in Baucau.

In November 2002 there were deaths in riots in Baucau. Also in 2010 there were fights between youth gangs near the street market.

Baucau is the second oldest bishopric in East Timor. The Baucau diocese was founded in 1996. At the front of the Santo António Cathedral there are two Portuguese, white and blue tile pictures, so-called azulejos . The Al Amal Mosque and the Igreja de Vila Nova Church are located in Baucau Vila Nova.

Colorful wall paintings, for example with motifs reminiscent of animistic rites , decorate the place. There is a cave near the street market with the source of Wai Lia . Originally a holy place of the old, animistic belief, a statue of the Madonna was erected here in 2010, so that both religions are now practiced here.

Other buildings and facilities

School No. 2 in Neustadt

As in other parts of East Timor, large parts of the infrastructure in Baucau were destroyed in the Indonesian Operation Donner after the independence referendum in 1999 . Nevertheless, some old buildings from the colonial era have been preserved, such as the St. Antonius secondary school in Teolale, the old market building and the Pousada de Baucau hostel , a pink building whose restaurant overlooks the sea. The market building was originally built in 1932 under manager Armando Eduardo Pinto Correia and has served as a congress center since 2014. It was partially destroyed in the Second World War and only rebuilt after 1970. During the Indonesian Operation Donner in 1999 the building was again devastated and unusable. In 2014 the State Secretariat for Culture turned it into a regional cultural center. It contains a small library with internet access and various exhibitions. The central area is used for demonstrations, conferences and exhibitions. The small park in front of the building was also restored. The public outdoor pool from colonial times (Piscina de Baucau) , which belongs to the Pousada de Baucau, is back in operation. The large fountain in the center of the old town is used for washing clothes and by the children for bathing.

The Baucau airport is the town six kilometers west, on the western border of Sucos Bahu.

In 1985 the soccer club FC Zebra was founded in Baucau. The Liga Futebol Amadora Primeira Divisão 2017 will take place at the Estadio Municipal de Baucau , among others .