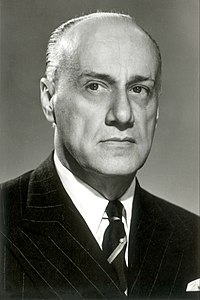 Jorge Alessandri was born the second of seven children. His father Arturo Alessandri served as Chilean President twice, his mother was Rosa Esther Rodríguez. He studied engineering at the Universidad de Chile in Santiago and worked there as a professor after graduating in 1919. In 1924 and 1925 he had to go into European exile with his parents. In the parliamentary elections in 1926, Alessandri ran as an independent candidate in the Santiago constituency and was directly elected. In 1932 he retired from political life and became president of the mortgage bank Caja de Crédito Hipotecario , a task he fulfilled until 1938. He also ran a paper and cardboard factory . Later, from 1944 to 1947, he worked as chairman of the Confederación de la Producción y el Comercio industrial association .

On August 2, 1947, President González Videla appointed a cabinet of military and independents to calm the tense social and political situation, and Alessandri was appointed Minister of Finance. He reorganized the financial administration and pursued a rigorous austerity course by suspending regular increases in state salaries. The wage freeze created considerable resentment among civil servants and trade unions. In late January 1950, civil servants went on strike, by February widespread opposition to the government's economic policies turned and Alessandri and the rest of the government were forced to resign under public pressure on February 3, 1950. However, he remained in the state cabinet for many years.

In late 1956, the Liberal Party of Chile made him a candidate for the Senate, and in March 1957 he was elected by a clear majority in his constituency in Santiago. During this time, the political landscape of Chile was in a phase of upheaval, which was shaped by many coalitions and party changes: Alessandri was considered conservative by the liberals, and in the end it was the more liberal tendency within the Conservative Party that ensured that the as Independent economist Alessandri was raised to the presidential candidacy for the Conservatives.

In the elections, Jorge Alessandri won 32.2% of the vote, his rival candidate from the United Left was Salvador Allende . He managed to get 28.5% of the voters behind him. Eduardo Frei Montalva , who had entered the race for the moderate left Christian Democrats , achieved 20.5% of the vote. Congress named Alessandri President of Chile in March 1958. In parliament he had the Liberals, the Conservatives and the Radical Party on his side.

His policies were primarily aimed at reducing inflation and at budgeting. Alessandri reduced government spending and opened the country to imports in line with a liberal economic policy. The freezing of salaries in the public sector in particular triggered extensive waves of protests and strikes. In May 1960, Chile was also hit by a severe earthquake that left 342 dead and caused more than $ 550 million in damage to the densely populated areas between Concepción and Puerto Montt . The rebuilding of the supply in the earthquake areas temporarily suppressed all other problems.

Conservatives and liberals lost massive votes in the 1961 parliamentary elections. In order to maintain parliamentary support for his government policy, Alessandri had to appoint several ministers from the Radical Party, which - alongside the Christian Democrats - was one of the winners of the election. The new government set more social accents, but could not break the continued resistance of the socialists and trade unions.

With the Alliance for Progress proclaimed by US President John F. Kennedy , the United States tried to achieve economic and social improvements in Latin America, not least in order to undermine the socialist and communist opposition groups that followed the successful coup of Fidel Castro in Cuba had become more and more popular in 1959. For Chile, American development aid brought a tax and agricultural reform in 1962, but this did not change the ownership structure. The lion's share of the fertile land was still in the hands of a few families of large landowners.

In terms of foreign policy, Alessandri faced ongoing conflicts with Chile's neighbors Argentina and Bolivia , which revolved around the drawing of borders in the Andes. During this time, Chile tried to limit armaments in South America and proposed a joint renunciation of nuclear weapons . For the Chileans, Alessandri's tenure was also remarkable because television came to Chile under his presidency . The soccer World Cup in 1962 was one of the first broadcasts in one's own country. Alessandri's term of office ended in 1964. The Christian Democrat Eduardo Frei Montalva, on whom the moderate left's hopes for reform rested, was elected as his successor. From then on Alessandri ran his paper mill again.

In 1970 , after Frei's term ended, Jorge Alessandri ran again for president, again for the Conservatives and again against Salvador Allende. This time Allende was just ahead of the game and was named President by Congress. In 1976, the military government of Augusto Pinochet , which had come to power in a violent coup in September 1973 , appointed Jorge Alessandri President of the newly established Council of State ( Consejo de Estado ), whose task it was to write a new constitution to legitimize the military dictatorship . The new constitution, tailored by Alessandri and his colleagues to the needs of General Pinochet, was adopted in a referendum in September 1980 . However, the voting conditions by no means met democratic requirements and took place under massive repression of the military . After his task was completed, Alessandri resigned as State Councilor.

Jorge Alessandri now finally withdrew into private life. He managed his paper mill until his death in 1986. He never saw the end of the military dictatorship and Chile's return to democracy. His nephew Arturo Alessandri ran as a candidate for the pro-Pinochet right against Eduardo Frei Ruiz-Tagle as a presidential candidate and was defeated.

President of the Republic of Chile