Karl Josef Seitz (born September 4, 1869 in Vienna ; † February 3, 1950 ibid) was an Austrian politician, member of the Reichsrat , head of state as chairman of the constituent national assembly of German-Austria , chairman of the Social Democratic Workers' Party of German Austria (SDAP) and mayor of Vienna . 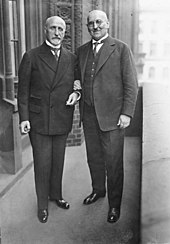 Seitz (left) with the Mayor of Berlin Boess

Karl Seitz was brought up in the city orphanage due to the early death of his father and the financial hardship of his mother and then attended the state teacher training college in St. Pölten .

As a politically very committed young teacher and member of the “boys”, he was a co-founder of the Free Teachers' Voice and later chairman of the Central Association of Vienna Teachers and the Vienna District School Council. In 1900 he married Emilie Heindl.

In 1901 he ran for the Social Democratic Workers' Party (SDAP) and was elected to the House of Representatives of the Reichsrat as the first social democratic member of the 4th Curia (so-called five-guilder men ); his constituency of Floridsdorf was then part of Lower Austria. In 1902 he entered the state parliament of Lower Austria . After entering politics, his intensive commitment to the teachers 'movement ended, but due to his services he was made an honorary member of the Lower Austrian provincial teachers' association. In the Reichsrat he was a member of the Austrian delegation to negotiate common affairs with Hungary and the national debt control commission and in the last years of the monarchy president of the war economy commission of both houses of the Reichsrat as well as vice-president of the house of representatives.

Chairman of Parliament, party leader and head of state

After Victor Adler's death on November 11, 1918, Seitz became party chairman and head of the parliamentary club of the Social Democrats, which became the strongest force in the election of the constituent national assembly on February 16, 1919. From March 5, 1919 (the day of his election as President of the Constituent National Assembly ) to December 9, 1920 (election and inauguration of the first Federal President , Michael Hainisch ), Seitz also functioned constitutionally as the sole head of state of the republic. The National Assembly held under his chairmanship its last meeting on October 1, 1920 from, the date on which it the Federal Constitution , the main constituent of the multi laws Federal Constitution , decided.

After the first National Council elections on October 17, 1920 , in which the conservatives became the strongest force, the Social Democrats under Seitz 'leadership, at the instigation of Otto Bauer , ended the grand coalition on October 22, 1920 and left the government. Seitz was elected Second President of the National Council on November 10, 1920 (the day the constitution came into force) . Independently of this, he played a key role in the separation of Vienna from Lower Austria in 1920 . 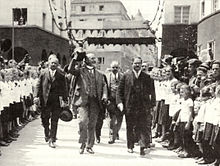 Plaque on a Viennese community building with a reference to the housing tax and the names of Karl Seitz, Hugo Breitner , Franz Siegel and Anton Weber 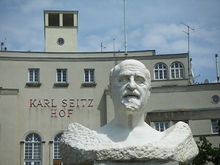 Sculpture in front of the Karl-Seitz-Hof

In 1923 he succeeded Jakob Reumann as governor and mayor of Vienna (see provincial government and city senate Seitz I to Seitz III) and remained in this position until his impeachment and arrest on February 12, 1934. Under his mayorship, his city councilors Julius Tandler in the field of health care and Hugo Breitner in the field of financial policy, as well as city school council president Otto Glöckel in the field of school organization, developed important municipal political concepts. Their implementation helped Vienna to flourish and made the city an international showpiece of social democratic local politics (“ Das Rote Wien ”). In 1929 he was made an honorary citizen of the City of Vienna .

In 1923 Seitz granted Imre Békessy "the longed-for right of home, which made his dual citizenship in Austria and Hungary possible". The newspaper publisher, who was fought against by Karl Kraus because of his dubiousness and criminality, did not return to Vienna from a stay abroad in 1926 after the managing director of his publishing house had been arrested for extortion.

Political radicalization took place during Seitz's tenure as mayor of Vienna: The fire in the Palace of Justice in 1927 marked the turning point in the decline of the democratic republic. In the same year Richard Strebinger committed an assassination attempt on Seitz.

In March 1933, Engelbert Dollfuss carried out the so-called “ parliamentary disconnection ” against which the Federal President, as guardian of the constitution, did nothing. After the civil war (social democratic version) and the February uprising (conservative version) in 1934, Seitz arrested on February 12 was imprisoned for several months. After his release from prison, he made a contribution to the resistance with his “walks”: It caused a sensation that the former top politician, who was known throughout Vienna and who could not be blamed for legal reasons, simply strolled through the streets. He was in contact with the Revolutionary Socialists , albeit loosely because of his police surveillance .

In the course of the “Anschluss” of Austria, a short imprisonment followed in 1938. In 1939 Seitz left the Roman Catholic Church, although he was in contact with the resistance group around Chaplain Heinrich Maier . In connection with the assassination attempt on July 20, 1944 , Hitler was interned , including in the Ravensbrück concentration camp . After his release from the concentration camp shortly before the end of World War II , he was exiled to the small town of Plaue in Thuringia . 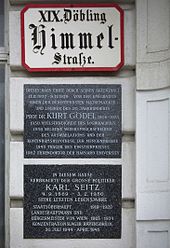 After the end of the war he returned to Vienna with a delay due to the occupation. After his first wife died in 1943, Seitz married Emma Seidel (1895–1978), a daughter of women's rights activist Amalie Seidel , in 1945 . After the re-establishment of the SPÖ , he resigned the party chairmanship, which he still held formally as the last SDAP chairman, in favor of Adolf Schärf . He became honorary chairman of the SPÖ and continued to work as a member of the National Council. Seitz, weakened by a minor stroke , caused the last big stir with his speech on March 20, 1946, in which he spoke out against the Allies being patronizing the Austrian National Council . Seitz was President of the Austrian Red Cross from 1946 to 1950 .

On February 3, 1950, Karl Seitz died of heart failure at the age of 81 and was buried on November 12, 1950 in a specially erected, honorary grave in the Vienna Central Cemetery (Group 24, Row 5, Grave No. 2). His second wife Emma is buried in the urn grave of her mother Amalie Seidel at the Simmering fire hall .

On June 16, 1951, a large community building complex built during Seitz's tenure as mayor in Vienna's 21st district was named Karl-Seitz-Hof , and on its central square, Karl-Seitz-Platz, named in 1998, a Seitz designed by Gustinus Ambrosi -Sculpture erected (Seitz had been elected to the Reichsrat in 1901 as a member of parliament for Floridsdorf , 21st district since 1905 ).

President of the Austrian National Council