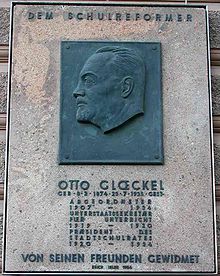 Otto Glöckel (born February 8, 1874 in Pottendorf ( Lower Austria ), † July 23, 1935 in Vienna ) was a social democratic politician and school reformer of the First Republic in Austria .

As the initiator of the reform pedagogy of the interwar period - the Vienna school reform - Glöckel was an advocate of the comprehensive school and opponent of educational privileges as well as a fighter against the ecclesiastical supremacy in the public schools.

Otto Glöckel was born in the Pottendorf schoolhouse as the son of the junior teacher Friedrich and his wife Fanni. After the elementary and community school he studied at the state teacher training college in Wiener Neustadt , where he graduated with the Matura in 1892. He then became a temporary sub-teacher on the Schmelz , where he initially taught in elementary schools in the 14th district.

In 1894 he became a member of the Austrian Social Democratic Workers' Party and, together with Karl Seitz and Paul Speiser, founded the Viennese teachers' movement "Die Junge", a social democratic teachers' association. Since 1897 he was married to Leopoldine Glöckel , née von Pfaffinger, who was also politically active and supported his reform policy. In the same year he was dismissed from school by Mayor Karl Lueger because of his social democratic convictions .

After the end of the red-black coalition (1918–1920) Glöckel had to resign as Minister of Education. He moved to Vienna in 1920 to continue the reforms in a limited space as deputy chairman of the district school council and from 1922 to 1934 as president of the Vienna city school council . The Vienna school reform was carried out under his leadership .

In 1934, as a result of the February revolt on February 12, 1934, in which Glöckel was not involved, under the corporate state regime, he was arrested in his office in Palais Epstein and taken to the detention camp in Wöllersdorf . Glöckel only survived imprisonment for a short time. He died in his house in the Gaudenzdorf district .

As early as 1911, Glöckel demanded a strict separation of church and school. He was against the compulsion to do religious exercises, which cemented the influence of the clergy on the school system. He made the responsible minister and later Prime Minister Count Stürgkh responsible for this. In 1917 he gave his programmatic speech in the Reichsrat on the importance of education in the future; this speech could only be published censored in the Habsburg monarchy.

The Vienna school reform initiated by him aimed at a comprehensive school : internal instead of external differentiation of the school system, common school for 10-14 year olds. Richard Meister was an influential opponent . In addition, he introduced the possibility of deregistering from religious instruction, the class representatives and school representatives, stipulated the teaching freedom of teachers and promoted a democratization of the school sector.

His secular so-called Glöckel decree , in which the mandatory participation of students in religious education and daily school prayers were abolished, is also of particular importance . His goal was, among other things, the democratization of the school through organizational and content-related co-determination of teachers, parents and students and a departure from the pure learning school ("drill school"). He founded the federal educational institutions . In his decree of April 22, 1919, he gave women free access to universities . He promoted the Schönbrunn Educational School and appointed the educational reformer Wilhelm Jerusalem in 1919 as associate professor and in 1923 as full professor of philosophy at the University of Vienna . 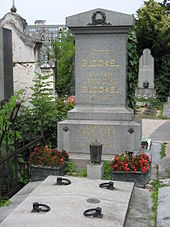