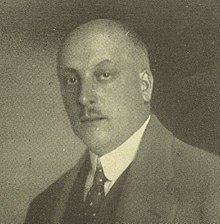 Eduard Heinl was born in the 1st district, at Naglergasse 19. After finishing school, he joined the city service in 1898 and the state service in 1910. In 1904 he was entrusted with the political organization of the Christian Social Party . From 1918 he was director of the Institute for the Promotion of Trade, Commerce and Industry in Vienna.

In 1945 Heinl became State Secretary. From 1946 to 1948 he was Federal Minister for Trade and Reconstruction . From 1951 he was finance officer of the ÖVP. In 1951 he received the Ring of Honor from the City of Vienna .

In 1954 he received the Grand Decoration of Honor in Gold on ribbon for services to the Republic of Austria .

Heinl was also President of the Austrian League for the United Nations.

In 1961, the Dr.-Eduard-Heinl-Gasse in Vienna- Döbling (19th district) was named after him.

Minister of Economic Affairs of the Republic of Austria

Minister of Social Affairs of the Republic of Austria