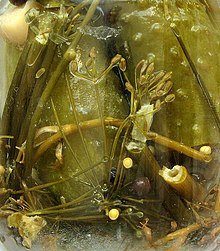 Pickled cucumbers in a mason jar

Pickles , in North and East Germany as pickles known, by lactic acid fermentation preserved cucumbers . They were already valued in Roman antiquity and are now mainly found east of an imaginary line from Berlin to Vienna (pickled cucumber meridian) throughout Eastern Europe and Russia.

In preparation, firm, medium-sized and undamaged pickling cucumbers are thoroughly cleaned. In some areas they are salted in a little and rinsed off with cold water after about 24 hours.

The cucumbers are scratched or pricked with a fork and then purified in large glasses , stone pots or sulphured barrels stacked. Other ingredients are added, especially dill , horseradish and garlic , but depending on the recipe also can pepper - and allspice , bay leaf , grape leaves , basil or cherry leaves are added.

The ingredients are doused with moderately salted brine, which has cooled down after boiling once . Finally, they are weighed down with a linen or cotton cloth - boiled out beforehand for sterilization -, a wooden board or plate and a stone so that the cucumbers are always covered by the brine. In order to start the fermentation process of lactic acid fermentation, a small piece of rye bread or some sourdough can be placed on top as a conclusion.

The container is covered but not sealed airtight. If possible, the cucumbers are stored for a few days at room temperature - but not above 30 ° Celsius - and then at cellar temperature. The fermentation process is completed after about six weeks.