The title of this article is ambiguous. Udenheim was also the name of today's Philippsburg until 1615 . 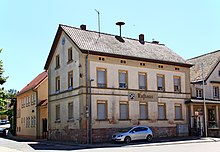 The town hall in Udenheim

Udenheim is a municipality in the Alzey-Worms district in Rhineland-Palatinate . It belongs to the Verbandsgemeinde Wörrstadt .

As a wine-growing community , Udenheim is located in the largest wine-growing district in Germany and in the middle of the Rheinhessen wine-growing region . It borders on Saulheim , Sörgenloch and Schornsheim .

Udenheim was first mentioned in a document (No. 1286) dated June 12, 773, when Selfniu donated two vineyards in Udenheim to the Lorsch monastery. Another donation (No. 1764) was made in 802 or 803 by Baderich over seven acres of land and a vineyard.

The development of the population of Udenheim, the values ​​from 1871 to 1987 are based on censuses:

The council in Udenheim consists of 16 council members, who in the local elections on May 26, 2019 in a majority vote were elected, and the honorary mayor as chairman. Until the 2009 election, the council members were elected in a personalized proportional representation.

Description : “In blue, a golden right-slanting bar covered by two red rafters, each side with a silver eagle turned to the right. Above that in a golden shield head there is a blue thread of a vine. "

The Udenheim coat of arms was approved by the district government of Rheinhessen-Palatinate as early as 1969 and was ceremoniously unveiled by the then mayor Richard Schrauth at a small folk festival on May 1st with lively participation of the population and local associations. While the vine refers to the local viticulture and can also be found in a similar design as a full relief on the keystone of the tower floor of the mountain church built in 1518, the other two motifs represent a combination of the coats of arms of earlier Udenheim local lords: the red rafters in gold, the gender of Peter von Udenheim, who was entrusted with the estate in Udenheim by Count Heinrich II. von Sponheim in 1380, the silver eagles belonged to the family of Johann Friedrich Köth von Wannscheid, who died in 1590 and found his final resting place in the venerable mountain church.

The Protestant mountain church Udenheim is located above the village in the direction of Schornsheim. Since 1874 there has been a bell tower in the center of the village, which was built for a planned church. For a while, the bell tower also served to alert the fire brigade with the fire bell .

Cities and municipalities in the Alzey-Worms district