Eich one is Rheinhessen local church in the Alzey-Worms district in Rhineland-Palatinate and seat of the eponymous municipality , to which it belongs too.

Eich is located in Rheinhessen between its neighboring towns:

The Gimbsheimer Altrhein with the Altrheinsee , the Elisabethensee and the Heinrichs-Talaue-See runs north past the place ; to the east lies the Eicher See with a connection to the Rhine and marina .

The first documentary mention was made in the Lorsch Codex in the 14th year of King Karl's reign in the period between October 781 and October 782 on the occasion of a gift from Wanbert in Heichinen (Eich). At that time, Lorsch Abbey was given two court rides with two lifts , seven meadows and three serfs . The next five written documents from Eich are also contained in the Lorsch Codex.

The former places upper (superior) and lower (inferior) Lochheim are no longer present today due to the floods and changes in the course of the Rhine, but documents in the Lorsch Codex still remind of this.

The districts of Lochheim inferior and superior are shown on the map Descripto pagi Wormatiensis by Andreas Lamey and Ferdinand Denis .

On March 22, 1515, Franz von Sickingen took away a loaded Rhine ship with citizens of Worms on the Rhine because they had not met a request for payment beforehand. Several councilors and the former mayor were brought to the Ebernburg and only released for a heavy ransom .

From a fishing settlement it has developed into an agricultural community that now also serves as a residence for employees in the nearby cities.

The local council in Eich consists of 20 council members, who were elected in a personalized proportional representation in the local elections on May 26, 2019 , and the honorary local mayor as chairman. 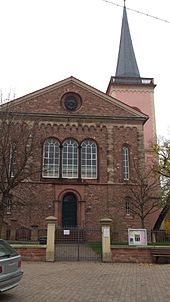 The Protestant parish church was built in 1839 according to the construction plan of the Grand Ducal Hessian provincial architect Ignaz Opfermann (1799–1866) from Mainz.

The Eicher lake is too calibration and Hamm belonging Stretch with access to the Rhine . It is also called the "Rheinhessisches Meer" because it is the largest lake in Rheinhessen. The lake is surrounded by a few hundred weekend houses and has a marina where large yachts can moor.

In the center of the village there is a stone-vaulted cowshed , this historic cross vault is used today as a wine tasting room for a winery.

Classicist column
Opposite Osthofener Strasse 60, at the junction to Alsheimer Weg, there is this classicistic column as a reminder of the 'Eicher Strasse from Rheinstrasse to the Rhine' with 3695 fathoms = approx. 9.24 km from the years 1828/29. This refers to the then valid " Grand Ducal Hessian Measure of Length": Of which four feet are one meter , 10 one Grand Ducal Hessian fathoms and 1500 fathoms are an hour .
Old school house

The schoolhouse was used from 1904. It has two and a half floors with apartment. It was occupied with a Protestant and a Catholic class. In 1927 a girls' training school was set up in the basement. From Easter 1934 there was no more denominational school and the classes were merged. After the school rooms were closed in 1966, the lower part of the school building was used as a commercial space in 1967. The rooms have been used for a youth club on the ground floor since 1978 and a local history museum was set up on the first floor in the same year.

With the Altrheinhalle, Eich has had a sports facility with 6,000 seats since 1974, which is also used for concerts and television broadcasts. In the vicinity of the hall there are also competition facilities for athletics and a tennis facility (since 1977). There is a sailing club and two boules lanes on Lake Eicher . A beach has been set up on the Altrheinsee. There is also the gymnastics club from 1888 Eich, FC Germania 07 Eich, the Blau-Weiß tennis club and two fishing clubs. They are the AC Rheinlust 1954 Eich and the ASV Eich.

The focus is still on rural agriculture . But sand and oil production have also developed into important economic sectors.

Eich has a primary school and since the school year 1998/99 has a regional school , today Realschule plus , where the Realschule leaving certificate can be obtained.

With reference to the community

Literature about calibration in the Rhineland-Palatinate state bibliography

Cities and municipalities in the Alzey-Worms district