This article deals with the game of skill or the precision sport "Boule" , for the game of the same name see Boule (game of chance) .

In a narrower sense, is the term Boule ? / i (from French la boule “the ball”) or boule game only briefly for the ball sport Boule Lyonnaise , the so-called “sport boule”.

In Germany, however, “Boule” (like the word “Boccia”) is used more colloquially as a collective term for all ball sports , as is the case in this article. In addition to the aforementioned Boule Lyonnaise, the ball sports also include the Jeu Provençal derived from it , its offshoot of pétanque , British bowls and Italian boccia (also known as "Raffa"). In addition to these five "official" ball sports, there are other regional sports or ball games that have similar rules, such as: B. Boule-en-Bois, Boule-de-Fort, Boule-des-Berges and Boule bretonne .

Many Germans also associate “boules” with the recreational ball game played by the French in public places. The correct name for this, however, is pétanque. With around 600,000 license players in 76 (national) pétanque associations, it is the most widespread ball sport. 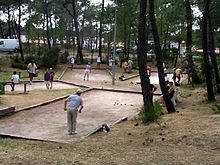 Public Boulodrome in the resort of La Palmyre on the Atlantic

British bowls are played on grass

Player at the throw

Boules player at the port of Bonifacio

As early as 460 BC Christ is a recommendation of Greek doctors (including Hippocrates ) for playing with stone balls. In the 2nd century AD, Iulius Pollux described a game in which balls were thrown at a brick; the loser of the game had to carry the winner to the finish line on his shoulders. Boccia and Boule Lyonnaise have their common roots in this game that was widespread in the Roman Empire. The roots of bowls can be traced back to London in the 12th and 13th centuries. Century.

From the Middle Ages, boules in France can be proven primarily through its prohibitions:

In Austria , pétanque and boccia are played organized within the framework of the Austrian Pétanque Association .

Originating from the English-speaking sports like bowling and snooker use the word for their ball-round sports equipment ball (dt .: Ball, ball ), although the use of the words is not uniform in the rules to some extent.

Ball sports in the narrower sense are the sports organized in the Confédération Mondiale des Sports de Boules (CMSB). Quote: "The CMSB was recognized by the IOC (Comité International Olympique) on October 15, 1986 in Lausanne as a representative of all ball sports." (For details see below under: Organizations )

In France at least there are some regional ball sports organized in associations, the rules of which are very similar to the basic rules of the game (see below) of the CMSB sports. These are also covered here.

Sports such as curling and stick sports are tactical and similar to ball sports.

There are also ball sports, especially in the traditional and leisure areas. If they are similar to the CMSB sports in the playground, they are also dealt with here. Other ball sports are more of a long throw discipline (e.g. Boßeln ).

Bowling is a sport of skittles , snooker is not a sport of billiards . The shot put is part of athletics .

Boccia and boules are the most popular leisure options in Germany.

Boccia became particularly popular in Germany thanks to the former Chancellor Konrad Adenauer , who was shown in newsreels while playing boccia while on vacation in Italy . In the period that followed, a recreational game with water-filled plastic balls came on the market, which has little in common with the actual boccia game (Punto-Raffa-Volo). 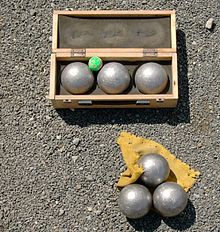 Many Germans associate boules with the recreational ball game played by the French in public places. However, the correct name is pétanque . The French use pétanque to distinguish it from other French boule (ball) sports.

The game in public places is the leisure variant, the sport variant is played on or in club facilities (boules pitch (French: Boulodrome ) or boules halls).

One type of boule is crossboule , in which the venue is not fixed, but moves dynamically in the general public space (similar to a variant of Boßeln ).

In Germany, the leisure variant was "imported" mainly by tourists in France and was mostly called boules. In the rules of the game, recreational players follow the pétanque rules.

The sport of pétanque was initially practiced in Germany near the French border and / or in the French occupation zones . So z. B. in Berlin in the former French settlement at Tegel Airport a boulodrome created by the French, which after the departure of the French from the Club Bouliste de Berlin e. V. was bought up.

In all of the sports mentioned, two teams or formations consisting of one to three players play against each other. The possible team strengths are different in the individual sports.

The aim is to get as close as possible to a target ball with your own balls. The target ball and the opposing balls can also be pushed out or shot away. In France the target ball is called cochonnet (German: piggy ).

Sometimes it's just a matter of shooting as precisely as possible. For this, there is precision shooting, a kind of special shooting competition, in pétanque and boule Lyonnaise.

The following table shows the dimensions and materials of the competition balls.

In 2009 a bullet exploded in Switzerland. Subsequent investigations by EMPA found that the balls sold by Coop were filled with mortar in order to save metal for the shell. The filling corroded the metal and formed an explosive gas mixture.

In September 2016 another bullet exploded at a neighborhood festival in Nettetal . As a result, the remaining bullets were blown up in a controlled manner by the emergency services. The boules and pétanque association in North Rhine-Westphalia then advised looking for quality marks when buying balls. Tested balls would show the company name, a serial number and the weight.

There are different forms of competition:

A team consists of several formations.

In boccia there are formations

The following formations are played in bowls

Similar to tennis, bowls are predominantly played singles. There are also side games, series of singles games, team games or side games and tournament forms (tournament of games)

Jeu Provençal is mainly played as a triplet (3 players), there are also the formations Doublette (2 players) and Tête à tête (1 player)

The following formations are played in pétanque :

From the doublette onwards, a distinction is made between the pointeur (the “leger”) and the shooter (the “shooter”, French tir “shot”), in the triplet there is also the milieu (French for “middle”).

In Germany, national and German championships in Tête-à-Tête are held. Internationally, triplets are usually played. In contrast to bowls, where mostly singles are played, there are fewer tournaments for individual formation in pétanque.

In addition, international and national tournaments as well as championships for teams composed of several formations are organized. There are different rules about the formations belonging to a team.

In pétanque and boule Lyonnaise there is precision shooting.

The Lyonnaise disciplines Tir progresif and Tir de précision are on the program at the World Games and the Mediterranean Games .

Boule-en-Bois (also Boule de bois or La Vendéenne) is a ball game that in Belgium in the regions of Chimay , Momignies , Sivry-Rance and Couvin , as well as four small towns in Sud-Hainaut and Sud-Namurois is played .

Boule de fort is a traditional ball game in Anjou and Touraine .

There are the following special features: asymmetrical balls and a kind of channel as a track that is 20 meters long and 7 meters wide. See also Boulodrome .

Boules of the mountain

The rules of Boule des Berges (also: Boule parisienne) were developed around 1865. Boule des Berg was an unofficial Olympic sport in 1900 .

Boule bretonne is a popular sport in Brittany , related to Boule Lyonnaise and Pétanque .

The aim of the game is similar to that of boules in the following sports, albeit with different sports equipment:

When Boßeln balls are thrown far.