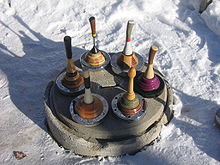 Stock shooting , ice stock sport or stock sport or ice stock sport is a sport that is particularly widespread in the Alpine region and has a certain similarity to curling . However, stock sport has its own focus, which is to be regarded as independent of curling. Ice stock sport is an old popular sport and, historically, can be attributed to the tradition that only spread in areas with freezing water and was only played in winter. In the modern form of leisure or competitive sport, which is characterized by rules and clubs, is played all year round and a distinction is made between team, distance and target competition. Stock sport is a precision sport .

Bavarian curling at the Nymphenburg Canal

Ice stock sport, or its forerunners, probably came from Scandinavia in the 13th century . The first pictures showing a similar winter leisure activity come from both Holland and the Alpine region of the 16th century. However, the claim that ice stock sport originated in Holland is now being questioned as the artists had traveled widely and probably took their inspiration from trips to the Alpine region. The first clubs were founded before 1900.

Unlike standardized, modern ice sticks that can be dismantled, they used to be made individually from wood and provided with an iron hoop, which ensured both the necessary hardness (upon impact) and optimal radial weight distribution. The floor was made slippery with (ski) wax. Neither playing fields nor staves nor team strength were standardized. In Upper Bavaria, for example, it has been handed down that in very severe winters, when the frozen foothills of the Alps had a particularly high load-bearing capacity, entire villages with large teams competed against each other.

In 1951 the first European championships took place in Garmisch-Partenkirchen . The first ice stock world championships were held in Frankfurt am Main in 1983 . As a demonstration competition it was shown as ice shooting at the Olympic Winter Games in Garmisch-Partenkirchen in 1936 and in Innsbruck in 1964 . Efforts to establish it as a discipline in the Olympic Games have so far not been crowned with success.

Today the centers of sport are located in southern Germany , Austria , South Tyrol and Switzerland . But sport is also actively pursued in the Czech Republic , Hungary , Slovenia and Poland . The sport is also attracting increasing interest in many other countries such as Australia , the USA and Canada , as well as in Africa and South America . The sport is also spreading in northern Germany, as far as Flensburg . A closely related special form has emerged in Carinthia , where the so-called Carinthian stick is played with otherwise very similar rules .

In contrast to standardized stick sports, ice (stick) shooting, which is less serious, is also widespread in the Alpine region. The shooting is done with sticks, which are mostly made of pear or maple wood. These are provided with a wrought iron ring and a wooden sting made of birch or ash. They can differ in shape, size and weight. Shooting takes place on frozen ponds, lakes or dammed streams. Often, specially created "ice rinks" are used. If possible, the length of the track should be at least 40 m. There are often regional and natural differences. A wooden cube (approx. 10 × 10 cm) with bevelled corners is used as a stave. In "Styrian game shooting" it doesn't matter where the stave falls during a turn, it just matters to place the stick as close as possible to it. Team sizes are not regulated and are between 4 and 20 depending on the number of ice runners present. 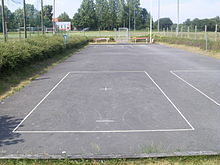 Example of an asphalt track on which stick shooting can be played in summer. (Asphalt plant in Flensburg) 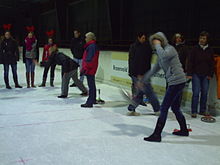 In a team game, two teams try to shoot the sticks as close as possible to the "stave" from the playing point. The stave is placed on the center cross before a turn begins. If the stave is changed in its position within the target field by an action that is valid according to the rules, it remains in this new position, which is also decisive for the scoring. It is returned to the center cross if it is outside the target field. There are six hairpin bends in total. 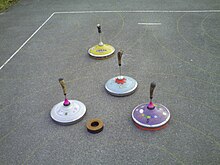 Ice stocks gathered around the stave

A team usually consists of four players, each player having to make one attempt per round. The aim is to bring a stick of your own team in the best position (i.e. closer to the stave than the opponent). Only sticks that are within the target field are rated.

One of the two teams starts the game by trying to play one of their sticks into the target area through the so-called measure. The opposing team then plays with the aim of getting one of their sticks in the best position. The positions of the sticks already in the target field can be changed by the new sticks; if a stick comes to a standstill outside the target field, it is removed. Opposing sticks that are in a better position may be shot out of the field.

The teams, called "Moarschaften" in the language of the stick shooters, shoot until all sticks have been played, whereby it is always the turn of the team that does not have the best position for the stave. When both teams have played with all of their sticks, the turn is over and the team whose stick is in the best position receives stick points. For the stick in the best position there are three stick points, for each additional stick of the same team that is closer to the stave than the opponent's next stick, there are another two points. If one or more sticks of the team that has a stick in the best position and whose turn it is, because the opponent has no sticks available, does not reach or touch the field, there are three stick points for the first floor and two for all others Points deduction. A game has six turns, i.e. rounds. The face-off changes with every bend regardless of the outcome of the last round. The team with the larger number of stock points receives two winning or game points, the other none. In the event of a tie, each team receives one profit point. The team with the most points wins the tournament. If two teams have the same number of winning points, the quotient of all own and opposing stock points decides (the stock note). 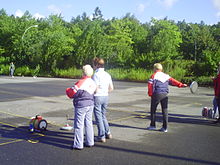 Player at the stick shot 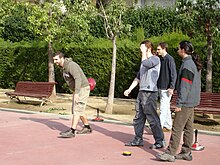 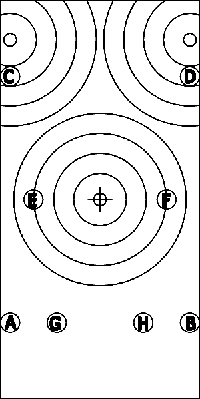 Playing field for the target competition

1st round: 6 attempts are made on the middle target rings, in which the player's stick should be brought as close as possible to the middle cross. The respective ring that the stick reaches is scored. The rings count from the outside in: 2, 4, 6, 8 and 10 points.

2nd round: 6 attempts are played on a target stick, which is set up alternately in the marked circles A to F. In the 6 attempts, the aim is to move the target stick set up in the circles out of the target area, whereby the player's stick should remain in the target area. Depending on the final position of the sticks, 0, 2, 5 or 10 points are awarded for each attempt.

3rd round: 3 attempts are made into the left and right rear target (target fragments), in which the player's stick should be brought as close as possible to the centers of the rings. The respective ring that the stick reaches is scored. The rings count from the outside in: 2, 4, 6, 8 and 10 points.

The technique of long-distance shooters differs significantly from that of team shooting, since here it is not necessary to have accuracy in the length and direction of the shot, but rather the strongest possible acceleration of the stick.

In the distance competition, a single player tries to shoot his stick as far as possible. The athlete has five attempts in the competition, of which the best comes into the evaluation. These must be delivered in a funnel-shaped path. If the stick leaves the lane, the attempt is only valid up to the point of leaving. The dimensions of the track change depending on the season. The summer track on asphalt or concrete pavement is slightly narrower than the winter track on (natural) ice. The funnel can be extended as required, which is also necessary when you consider that the world record is 566 m (achieved by Manfred Zieglgruber , SV Unterneukirchen (D) on the Seeoner See ).

When firing the shot, the shooter stands in the middle of the semicircle on a stand. He has space to run up to the 7-meter line, which is not a matter of course due to the swing and the kinetic energy acting on the athlete.

All players use the same stick body and the same outsole, but are allowed to use their own handles. A team score can also be created by adding up the results of several players.

From the audience's point of view, this discipline has the advantage that even a layperson can judge whether an attempt has been successful or not.

In winter it is played on ice . In summer you mostly play on asphalt , concrete or, lately, more and more often on concrete paving stones. There have recently been special “carpets” on the market. When it comes to the dimensions of the playing field, there are small differences between covered systems and systems without a roof. The distance between the playing point and the center cross in the target area is usually 24.5 m.

Schematic drawing of an ice stick

The tournament stick consists of three parts: the handle , the stick body and the outsole . The stick bodies weigh between 2.73 kg (student stick) and 3.83 kg and, depending on the weight, are provided with an identification letter, which must be visibly attached to the stick (type: M, L, P or E).

Weights of the stick body:

In winter, outside of the tournament, older stock variants, especially wooden sticks, are used. In Austria, sticks made from pear wood are also called Birnstingl .

The outsoles are available as summer and winter outsoles. The summer outsoles are made of plastic, the winter outsoles are made of rubber. They are available in different degrees of hardness ( called shores ), which leads to different coefficients of friction on the substrate. Corresponding colors are assigned to the different degrees of hardness so that the outsoles can be easily identified. The player needs the most strength for the particularly soft purple outsole. The gradation then runs through blue, yellow, orange, gray, black, green and white. In summer there is also a light, red outsole with a special profile.