When specifying a coefficient of friction, a distinction is made between sliding friction and static friction : With sliding friction, the friction surfaces move relative to one another, while with static friction they do not. In the case of Coulomb friction, the sliding coefficient is constant. In practice, a corresponding temperature , speed and pressure dependency can be seen, which indicates an influence of the surface change and the nature of the never ideally flat surface (but not on the coefficient of friction itself) and thus apparently influences the material properties.

The coefficient of friction in metals is measured on polished surfaces in order to largely exclude mechanical interlocking (form fit). The decisive factors are the adhesion and cohesion forces between the materials. Depending on the material, van der Waals forces or, in polarized materials, hydrogen bonds, similar forces are formed between the surfaces. The material adhesion is highest with ionic materials such as B. table salt .

Calculation of the frictional force

With the help of the coefficient of friction, the maximum static or sliding friction force between two bodies can be calculated.

For example, in order to push a metal block, one must first apply a force that is higher than the static friction force. If the block then slides over the ground, the smaller sliding friction force is sufficient. Because the coefficient of friction depends on the surface (dry, wet, ...), the friction forces also depend on it to the same extent.

The coefficients of friction from tables are only approximate. The friction depends on many different factors (material pairing, surface, lubrication, temperature, humidity, wear, normal force, etc.), so that the "correct" values ​​cannot be found in a table.

The most accurate results are obtained from a test under real conditions. Here, too, however, it should be noted that the relationships between the test and real use can change.

A driven or braked tire always has a slip with respect to the surface on which it rolls. With small transmitted tangential forces, this slip is so small that it can be neglected for many applications. With a higher tangential force, the slip initially increases slightly, then increases more and more. This means that a maximum tangential force can be transmitted with a given pressure. This is similar to the transition from static friction to sliding friction. The quotient between the tangential force and the normal force is called the adhesion coefficient. Its maximum indicates the maximum force a tire can transmit as drive or braking force for a given normal force. 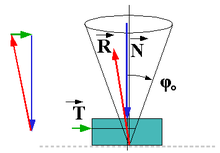 It can also be viewed as the tangent of the angle of friction . This is the smallest angle at which a body would slide down on an inclined plane. It applies

Take a car, for example: The tangent is known from everyday life as the incline of ascending roads and inclines, which is indicated on traffic signs (for example: 12% means an incline, over a length of 100 m the distance increases by 12 m). With a coefficient of static friction of one, slopes of a maximum of 100% (45 °) can be overcome. In reality, the climbing ability of vehicles is usually limited by the installed engine power and the overall transmission ratio of the gearbox - the exceptions are poor road conditions. On black ice or on a snow-covered road, the coefficient of static friction is very low, so that even slight inclines cannot be overcome or braking downhill is no longer possible.

"Μ is always less than one"

It is sometimes claimed that it should apply. only means that normal and frictional force are equal. With several material pairings, for example surfaces coated with silicone rubber or acrylic rubber, the coefficient of friction is significantly greater than one.

The formula is often used for static friction

specified. However, the value calculated in this way only designates the limit case of the maximum possible push or pull force that counteracts the frictional force and at which the object can still be stationary. If this is exceeded, the mostly smaller sliding friction force acts immediately :

Apparently this is z. B. in avalanches or landslides . Here the masses are close to the adhesive force. Small vibrations can locally exceed the static friction.