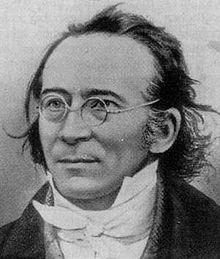 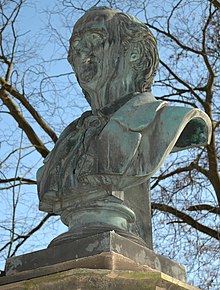 His bust, cast by Ferdinand von Miller , next to the cathedral in Speyer

Friedrich Magnus Schwerd was the son of the court clerk Ludwig Schwerd and his wife Elisabetha, née Gilardone. Up to the age of 14 the boy did not attend a regular school, but was taught by the Catholic priest Bernhard Nägele in Eich (Rheinhessen) . 1809–1813 he studied in Mannheim and Mainz .

From 1814 until his death, Schwerd worked as a teacher of mathematics and physics, as well as Latin, Greek and biology, at the Royal College in Speyer, today's grammar school at the Kaiserdom . He earned a high reputation for his scientific work. In the field of astronomy, he made precision measurements on 1751 stars . A mathematics textbook he published in 1828 was still used 100 years later in English translation in New York. In 1830 he created one of the sheets of the star map series of the Royal Prussian Academy of Sciences in Berlin. Since 1855 he was a foreign member of the Bavarian Academy of Sciences .

In geodesy (earth and land surveying) he developed a new measuring method based on the principle of the Schwerdschen small base , which was used until it was replaced by today's satellite surveying. Schwerd devoted himself extensively to investigating the propagation of light at various types of apertures and developed the associated calculations on the basis of wave theory . On June 12, 1860, King Maximilian II of Bavaria awarded him the Knight's Cross First Class of the Order of Merit of St. Michael . He was buried in the old cemetery Speyer , where his tombstone is preserved in today's cathedral chapter cemetery .

One of the most famous students of Friedrich Magnus Schwerd was the later priest Paul Josef Nardini (1821–1862), who was also very interested in science and who was beatified in 2006 .

The Friedrich-Magnus-Schwerd-Gymnasium in Speyer was named after Friedrich Magnus Schwerd.