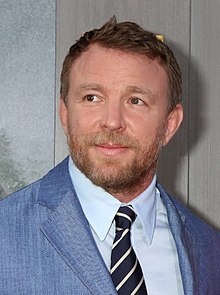 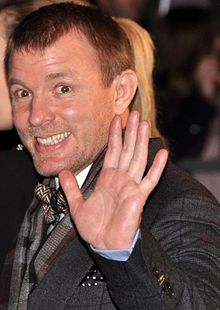 Guy Ritchie in Paris for the premiere of Sherlock Holmes: A Game of Shadows (January 2012)

Ritchie began directing commercials and music videos in 1995 . In the same year he shot the short film The Hard Case , with the help of which he was able to finance his first film Bube, Dame, König, grAS , which became a cult film . The subsequent film, Snatch - Pigs and Diamonds , featured a larger cast of stars with actors like Brad Pitt and Benicio del Toro . In addition, Ritchie had a much larger budget for Snatch than on his debut film. On December 22, 2000, he married the singer Madonna , with whom he shot the controversial music video What It Feels Like For A Girl and the short film The Hire: Star for BMW in 2001 . His feature film Stormy Love - Swept Away (2003) with Madonna in the lead role failed both critically and commercially. Two years later, Revolver, was the third film Ritchie with Jason Statham in the lead role. Commercially, the film could not build on the successes of Jack, Queen, King, grass and Snatch - pigs and diamonds , but it is the film with which Ritchie has been most satisfied to date.

Madonna and Ritchie have a biological son and an adopted son. The marriage was divorced on November 21, 2008 in London, he received severance pay in the amount of 55.6 million to 66.7 million euros.

In 2008, Ritchie directed the Nike commercial Evolution , which was shot for Euro 2008 , among other things , and he also directed the film Rock N Rolla with Gerard Butler and the commercials Nespresso - What else? with George Clooney .

In 2009 Ritchie's film Sherlock Holmes was released with Robert Downey Jr. as Sherlock Holmes and Jude Law as Dr. Watson in the lead roles. In 2011, a sequel entitled Sherlock Holmes: Game in the Shadows was realized. 2015 the film was released under his direction Codename UNCLE , a movie adaptation of the series Solo for Oncel King Arthur: Legend of the Sword (2017) is based on the Arthurian legends .

Starting in September 2017, Ritchie worked on Aladdin , a live-action version of the 1992 Disney animated film Aladdin, with Mena Massoud as the title character, Naomi Scott as Princess Jasmine, Will Smith as Genie and Marwan Kenzari as the antagonist Jafar. It was released in theaters worldwide on May 23 and 24, 2019.

In 2017, Ritchie was accepted into the Academy of Motion Picture Arts and Sciences (AMPAS), which awards the Oscars annually.