Willard Carroll "Will" Smith Jr. [ smɪθ ] (born September 25, 1968 in Philadelphia , Pennsylvania ) is an American actor , film producer and rapper . In the late 1980s, he became famous as a rapper under the name The Fresh Prince . Smith had his breakthrough as an actor in the internationally successful sitcom The Prince of Bel-Air , which ran from 1990 to 1996 on NBC . Since 1996, Smith has appeared almost exclusively in films. He received an Oscar nomination for Best Actor in 2002 and 2007 for his roles in Ali and The Pursuit of Happiness . He has also been nominated for the Golden Globe several times and is a four-time Grammy Award winner.

Will Smith grew up as the second eldest of four siblings in a middle-class family in West Philadelphia . His father William C. Smith Sr., an engineer for refrigeration , was at that time manufacturer of refrigeration equipment. His mother, Caroline Smith, was a teacher .

From 1992 to 1995 he was married to Sheree Zampino, with whom he has a son (Trey Smith, * 1992). He has been married to singer and actress Jada Pinkett Smith since 1997 . She was supposed to play his girlfriend in the series The Prince of Bel-Air , but was rejected on the grounds that she was too short with her 1.52 meters (Will Smith is 1.88 meters tall). They have a son Jaden , who also works as an actor, and a daughter Willow , who made her debut in the 2007 film I Am Legend .

In 2017 he was appointed to the competition jury of the 70th Cannes Film Festival .

Smith had been a rapper since he was twelve. First he worked as a DJ in various clubs in West Philadelphia and met Jeff Townes at a party . With him he played a few albums under the name DJ Jazzy Jeff & The Fresh Prince . With him, he won the first hip-hop - Grammy ever for the song Parents Just Do not Understand . The duo received another Grammy for Summertime .

His lyrics avoid vulgar expressions. The word " Fuck " has only appeared once, namely in the song Tell Me Why (on the album Lost and Found ), where he ultimately left it off.

For some films in which he was involved as an actor, he also contributed the official songs, such as Wild Wild West (a rap version of "I Whish" by Stevie Wonder ) and Men in Black , in which his songs each were used during the film's credits .

Smith was early on in his career by spending a lot of money and paying too little income tax . The IRS eventually imposed a tax payment of 2.8 million dollars against Smith, he that by a large part of his possessions lost and his income was seized. Smith was near bankruptcy in 1990 when Benny Medina, a manager at Warner Brothers , became aware of him. He thought there was something funny and TV-ready about the "naive, cheeky Will from Philadelphia" story in Beverly Hills . As a result, based on Smith's career, the NBC television series The Prince of Bel-Air was conceived, which was successfully produced from 1990 to 1996. Although Smith had a notable screen debut in Life - A Six-Pack in 1993, it was only in the buddy movie Bad Boys that he became known to a wide audience as a screen actor. His final worldwide breakthrough came with the films Independence Day (1996) and Men in Black (1997). 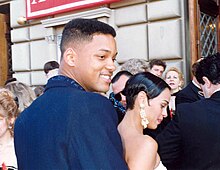 The Matrix makers Lilly and Lana Wachowski offered him the leading role of Neo in the Matrix trilogy in 1999 . Smith, however, turned down the role to instead star in Wild Wild West . In doing so, he helped Keanu Reeves to his most successful role to date. Smith later commented on Wild Wild West that he "felt bad about the commercial selling the movie as a good movie when it was a bad movie".

The film Ali shows the biography of the boxer legend Muhammad Ali alias Cassius Clay. The role earned Smith an Oscar nomination. In the film The Pursuit of Happiness , he acted alongside his son Jaden. For his acting achievements he was nominated for the second time for the Oscar, which he again did not receive. In 2004 he lent his voice to the tiny fish Oscar in Big Sharks - Small Fish .

In July 2017, it was announced that Smith would play the role of Genie in the real-life version of the Disney film Aladdin .

Between June 2007 and June 2008, Smith received $ 80 million in gages , ahead of Johnny Depp ($ 72 million), Eddie Murphy and Mike Myers ($ 55 million each ), according to Forbes Magazine. became the best-paid Hollywood actor. At the same time, Will Smith was one of the safest crowd pullers at the time. For example, he was voted “Biggest Cashier Star of the Year” in 2008 by American cinema owners. With the exception of Men in Black 3 , however, he has not had any major box office hits since 2009 .

Will Smith is currently being dubbed in the German versions of his films by Jan Odle , who also spoke to him in the sitcom The Prince of Bel-Air . He was voiced by Leon Boden in his previous films . 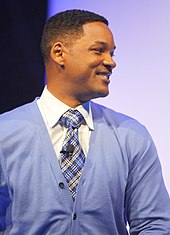 There are many positive statements about Scientology from Will Smith . He and his wife are close friends of the avowed Scientologist Tom Cruise . Smith denies affiliation with the Church of Scientology but said, "I just think a lot of the ideas behind Scientology are great, revolutionary, and non-religious." After Jada contributed to Collateral with Cruise in 2004 , that donated Couple of $ 20,000 in Scientology's educational campaign called HELP, The Hollywood Education and Literacy Program, which is the basis of Scientology's home-schooling system. In May 2008 Smith opened a school where six Scientologists were employed as teachers and, among other things, they were taught according to the study tech model developed by L. Ron Hubbard . The school has since closed.

In September 2008, Smith distanced himself from Scientology, and he also met with activists of the protest movement " Anonymous ". He also contradicted the rumor that the teachings of Scientology were being taught at the private school he and his wife Jada founded. At the end of 2008, he made another donation of 122,500 US dollars to Scientology, but he once again stated that he was not a member of the Church of Scientology. In addition to several Scientology organizations, Smith made donations to Christian, Muslim and Jewish organizations, totaling $ 1.3 million. In 2013, he and his son starred in the film After Earth , which is seen as a vehicle for spreading Scientology messages.

In October 2011, Smith acquired a minority stake in the Philadelphia 76ers NBA team, making him a co-owner of his hometown basketball team.

As a musician and actor, Will Smith has been awarded or nominated for various awards. He was awarded a Grammy Award in 1988 . His achievements as a blockbuster actor were recognized, for example, with the Saturn Award or the MTV Movie Award . Since 2001 he has also acted as a character actor and has received various Oscar and Golden Globe nominations.

So far, Smith has received over 47 prizes and over 90 nominations for his achievements as a musician and actor. The following overview shows the most popular prices.

Commons : Will Smith  - Collection of Pictures, Videos and Audio Files