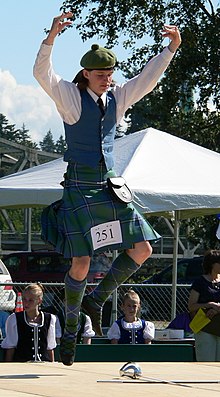 Dancers at the Highland Games in kilts

The word kilt comes from Scottish and has denoted a knee-length skirt since the 18th century. The modern kilt (also known as “Schottenrock” in German) is a wrap skirt woven from wool with an intricately pleated skirt that is worn by men in Scotland . The length of a kilt is chosen so that it reaches the wearer's knees and does not touch the ground when kneeling. Traditionally, the kilt is reserved for men, whereas women wear the so-called kilted skirts , which are kilt-like skirts that can be longer or shorter than real kilts.

History of the kilt

Oldest known representation of the Highland Dress (with trousers, tunic and belted plaid): Members of a Scottish mercenary regiment during the Thirty Years' War (1631) landing in Szczecin

According to Hugh Trevor-Roper , the item of clothing known today as the kilt (Gaelic am féileadh beag - the little plaid , Scots fillebeg ) was invented by the English factory owner Thomas Rawlinson after 1725 . Since he employed a few highland Scots at his blast furnace and saw them endangered by wearing their voluminous plaid, he shortened the great belted plaid (Gaelic am féileadh mór , the large plaid) and cut the wrinkles previously caused by winding into the garment. However, The Armorial Bearings of the Chief of the Skenes from 1692 already shows this in the féileadh beag .

The plaid as a term and later also as a piece of clothing can, however, be proven from the late 16th century. Before, tunics and long trousers, the triubhas or (Anglicised) trews, were worn. He is, as the term suggests, originated from a ceiling, at least proved the early 17th century by Highland Scots around the shoulders of her coat ( cotte ) was born. A little later, the term is noted as a name for the material from which the doublet, trousers and stockings of the Highland Scots Army in the civil war of 1639 are made.

The plaids of the tartan clothing are famous, but the clan was not recognizable by it, but more the wealth of the wearer. Arms wore plain or plain plaid fabrics, while rich people could afford multicolored plaids.

The big kilt, belted plaid , was a blanket and garment in one. In hot summers, the Scottish Highlander took it off and knotted the long shirt he was wearing between his legs or took a much thinner plaid. This is how the fighting took place in the summer. Those who could afford it wore the long trousers typical of the highlands, the trews , while the Lowland Scots preferred plain-colored breeches and white stockings.

After the Scottish defeat at the Battle of Culloden , kilts and plaids were banned as an element of Scottish identity in the Disarming Act of 1746, and only allowed again in 1782. The kilt experienced a great renaissance when the British King George IV visited Scotland in 1822 and presented himself in a kilt (along with flesh-colored tights); This is also the time when the myth of “clan tartan” was invented.

History of the check pattern 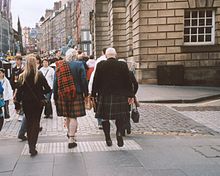 Today's checked pattern, which is typical for the respective clan, is probably an invention of the romantic 18th century. Although there is a very long tradition of plaid garments in Scotland, as well as on the mainland, these were probably not family-specific.

The oldest find of a “checked pattern” fabric, the Falkirk sett , dates back to the 3rd century BC. The pattern was created using the wool from light and dark sheep. This pattern was later called the shepherd's plaid , but no connection with today's clan tartan can be proven. However, these clothes contained pants, not a kilt or plaid. The oldest recorded tartans are assigned to regions ( districts ), not clans. One possible explanation for this is that the weavers in a certain area preferred certain patterns and the residents dressed locally. One of these tartans, the Huntly tartan , from the region of the same name in northeast Scotland, was worn by several clans during the Jacobite Uprising of 1745, such as the Gordon, Forbes, Munro, MacRae, Ross and Brodie clans. The legendary Bonnie Prince Charlie is also said to have worn a variant of it.

Even if the fixed assignment of tartans to clans is not tenable, "real" Scots still like to wear "their" tartan today. There are still neutral patterns that instead of the names of clans have those of regions (such as the Edinburgh tartan) or organizations (such as the tartans of the Royal Scottish Country Dance Society or the Debian project) or are completely free from such associations . There is also no control to determine whether the buyer of a kilt is “entitled” to wear the tartan in question, and as a foreigner you can choose from all the tartans that the kilt maker has on offer. Tartan weavers can produce any, even newly invented tartans on request; the Scottish Register of Tartans tries to catalog the existing tartans and avoid duplication.

Elements of the kilt

The check pattern , the tartan, is typical of the kilt . Many tartans bear the name of the clan to which they are assigned. It is often assumed that these tartans are reserved for members of the respective clan . Indeed, in Scotland, the wearing of a clan tartan is not welcomed by anyone outside the clan. But there is no binding legal regulation that prohibits this. Scots who see themselves as a member of a clan, of course, only wear the correct tartan. Most clans have different tartans depending on the reason they are worn (for example, Mod , Dress Mod , Weath or Faded Weath ). Other tartans are named after locations, regions, clubs or professions.

In Scotland today the kilt is less common as everyday wear than as festive wear. Supporters of the Scottish football or rugby national teams also like to wear kilts. There are kilts in different fabric qualities and weights from the lightweight “ casual ” for daytime use to the heavier “ full weight worsted ” for formal occasions. In addition to the traditional, high-quality, but expensive woolen material, cheaper kilts made of cotton or polyester are also available today, as well as “designer kilts” made of materials such as leather or denim. The amount of fabric used also varies: for a traditionally made kilt you need about 7 to 8 meters of fabric, simpler and cheaper kilts get by with half. The exact amount also depends on the measurements of the wearer and the width of the tartan pattern (set). Another factor is the folding, which can either be done in such a way that the tartan pattern repeats itself over the whole kilt ( pleating to the sett ) or the same color stripe of the pattern appears in the middle of each fold ( pleating to the stripe ). There are also kilts with pleats ( box pleats ). High-quality kilts differ from cheap goods, for example, in that they do not have a hem at the bottom , but the kilt ends with the selvedge of the fabric.

Whether you wear the kilt with or without underwear is up to your personal taste. Due to the wrinkles and the thickness of the fabric, you usually do not freeze even without underwear. For practical and hygienic reasons, however, underwear is sometimes worn these days, especially if the kilt is only borrowed from a rental company.

The knives Sgian dubh and Dirk are often worn with the kilt . Since a classic kilt has no pockets, a sporran is used instead.